Egyptologist and UAB associate professor Sarah Parcak, Ph.D., will reveal her $1 million wish live from the TED stage in Vancouver on Feb. 16. The event will be streamed live for the Birmingham community. 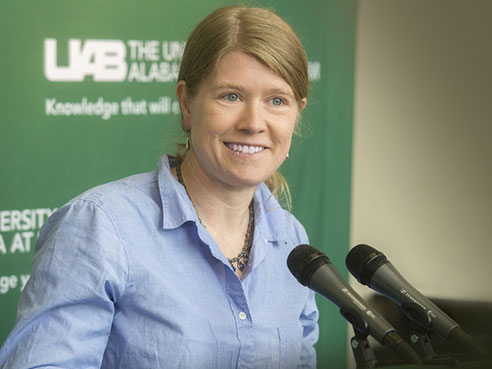 University of Alabama at Birmingham associate professor and 2016 TED Prize winner Sarah Parcak, Ph.D., will reveal her wish to change the world from the TED2016 stage in Vancouver on Tuesday, Feb. 16, and the event will be live-streamed at a UAB watch party that is free and open to the public.

UAB invites the Birmingham community to join us for a TEDxUABLive event to see what Parcak plans to do with the prestigious TED Prize. The event will take place at the newly opened Hill Student Center ballroom, 1400 University Blvd. Doors open at 6 p.m., and remarks will begin at 6:45, followed by the live stream at 7. Refreshments will be provided.

“This is an exciting time for UAB, Birmingham and the local TEDx community,” said Wes Lybrand with TEDxUAB. “Due to a shift in programming this year, the live broadcast will be available only to licensed TEDx organizers. We’re happy to partner with the university to provide a live stream for the community to share in this transformational event and learn more about Dr. Parcak’s efforts to preserve and protect ancient sites around the world.”

Each year, TED, the nonprofit devoted to Ideas Worth Spreading, awards the TED Prize to one exceptional individual and gives him or her the chance to conceive and launch a high-impact project — “a wish” offered to the winner without restriction. Parcak is a pioneer of space archaeology and has earned acclaim for being among the first to apply satellite imaging to locate archaeological sites in Egypt.

Parcak is a professor of anthropology in the UAB College of Arts and Sciences. She is a National Geographic fellow, TED senior fellow and founder of the UAB Laboratory for Global Observation. She has gained international attention for satellite mapping all of Egypt and unearthing 17 potential unknown pyramids, 1,000 tombs and 3,100 settlements. Parcak and her team have since uncovered thousands of additional ancient sites across Europe, the Mediterranean and the North Atlantic, and also have used satellite technology to map extensive looting in post-revolution Egypt.

The first TED Prize was awarded in 2005, born out of the TED Conference and a vision by the world’s leading entrepreneurs, innovators and entertainers to launch a global project that marries the recipient’s “wish” with TED’s global community.

The original prize: $100,000 and the TED community’s range of talent and expertise. What began as an unparalleled experiment to leverage the resources of the TED community has evolved into a $1 million award and an ambitious effort to spur global-scale change.

From Bono’s the ONE Campaign (’05 recipient) to Jamie Oliver’s Food Revolution (’10) to JR’s Inside Out Project (’11), Sugata Mitra’s School in a Cloud (’13), Charmian Gooch’s call to eliminate anonymous corporations (’14) and StoryCorps founder Dave Isay’s (’15) wish to take the platform global, the TED Prize has helped to combat poverty, take on religious intolerance, improve global health, tackle child obesity, advance education and inspire art around the world.

This is the first year TED Prize nominations for the $1 million award will be on a rolling basis.