Four from UAB named to Association of American Physicians

by Bob Shepard
The renowned Association of American Physicians has selected four UAB physicians for induction. 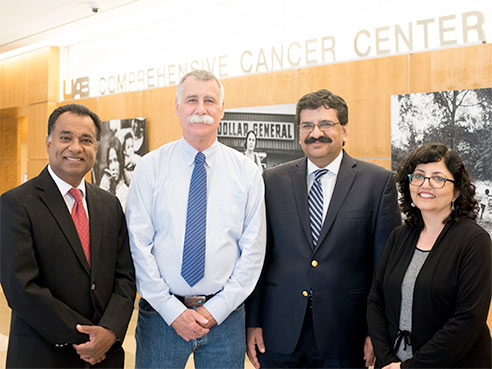 
Four physicians from the University of Alabama at BirminghamSchool of Medicine have been named to the prestigious Association of American Physicians.

Election to membership is among the most widely recognized measures of scholarly excellence among senior faculty members, particularly in departments of medicine and pediatrics.

“It is unusual to have so many physicians from one institution inducted into the association at one time,” said Robert Rich, M.D., former dean of the UAB School of Medicine and chair of the UAB nominating committee. “We were extremely gratified that four outstanding faculty members from UAB were chosen for this honor.  It serves to underscore not only the distinguished scholarly achievements of senior physicians, but also high-profile national recognition of UAB as one of the nation’s leading research-intensive medical schools.”

The Association of American Physicians is a nonprofit, professional organization founded in 1885 by seven physicians for the advancement of scientific and practical medicine. Now, the Association is composed of about 1,300 active members and approximately 600 emeritus and honorary members from the United States, Canada and other countries.

The Association’s goals include the pursuit of medical knowledge, and the advancement through experimentation and discovery of basic and clinical science and its application to clinical medicine. Each year, individuals having attained excellence in achieving these goals are recognized by nomination for membership by the Council of the Association. Their election gives them the opportunity to share their scientific discoveries and contributions with their colleagues at the annual meeting.