by Shannon Thomason
With a legacy of leadership, UAB National Pan-Hellenic Council has demonstrated exemplary service and commitment to academic excellence for many years. 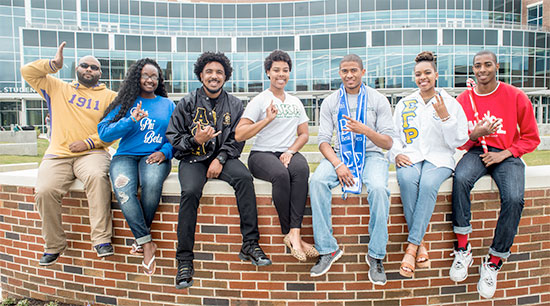 Student groups at the University of Alabama at Birmingham have been recognized for excellence in recent weeks.

The Xi Mu Chapter of Sigma Gamma Rho Sorority Inc. won the Empowerment Award and the Southeastern Chapter of the Year Award at their regional conference in Tampa, Florida, in April.

Additionally, the Kappa Kappa Chapter of Kappa Alpha Psi Fraternity Inc. was honored with the Southern Chapter of the Year Award at the 66th Southern Province Meeting, also held in April.

This is quite an accomplishment for UAB’s undergraduate chapters and is excellent news for UAB’s fraternity and sorority community, says Vice President for Student Affairs John R. Jones III, Ph.D.

“Our students are reaching new heights of greatness here at UAB, and we could not be more proud,” Jones said. “We intend to continue our support of their growth and service to help guide our state’s and country’s next generation of leaders.”

With a legacy of leadership that began with the founders and continued with the charter members, UAB National Pan-Hellenic Council has demonstrated exemplary service and commitment to academic excellence for many years. Current members have earned recognition and esteemed awards, including a student earning the top grade-point average for his or her organization in the state of Alabama. Others serve in top statewide leadership positions within their organizations and are active in student leadership at UAB, says this year’s NPHC adviser, Sharifa Wip. Wip is also mentor coordinator for Student Multicultural and Diversity Programs in the Division of Student Affairs.

“The NPHC at UAB is synonymous with service, leadership and excellence,” Wip said. “These leaders have earned the respect of their peers and fellow community members.

“The success of all of our individual chapters is a testament to the hard work and devotion they have for not only their groups, but NPHC as a whole,” Bowen said.

Whether it is Into the Streets Day of Service, mentoring students at West End Academy or collecting water to send to Flint, Michigan, UAB’s NPHC community is dedicated to philanthropy and service, Bowen says. Its members give hundreds of service hours, not because they are mandatory, but because service is an integral part of their rituals and principles and their commitment to values.

“Giving back to UAB and Birmingham is at the center of NPHC’s mission,” Bowen said. “Our groups have maintained respect for the history of their founding and continue to be a strong voice for the African-American community here on campus. The future of UAB NPHC is bright, and I envision big things in the future for this council.”