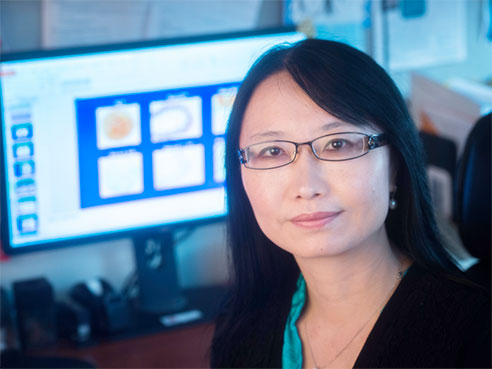 Yabing Chen, Ph.D., professor of pathology at the University of Alabama at Birmingham and a research scientist at the Birmingham VA Medical Center, has received a VA Research Career Scientist Award from the Department of Veterans Affairs.

This competitive award provides five years of salary support in recognition of outstanding achievements and contributions to VA research and development at the Birmingham VA Medical Center, and outstanding scientific accomplishments.

Chen is an established investigator with consistent extramural support from National Institutes of Health, Veterans Affairs and American Heart Association, and she has published more than 50 papers in high-impact, peer-reviewed journals. She studies molecular mechanisms of gene regulation and function in the pathogenesis of cancer and cardiovascular disease, both of which are major health burdens for veterans and the general population.

One of the recommendation letters for the award, from Dwight Towler, M.D., Ph.D., professor of medicine and director of the Jean D. Wilson Center for Biomedical Research at University of Texas Southwestern Medical Center, noted in particular Chen’s “elegant, groundbreaking studies on vascular calcification.” Vascular calcification, or hardening of the arteries, is prevalent in patients with atherosclerosis, diabetes and end-stage kidney disease, which promotes adverse outcomes in cardiovascular disease, the leading cause of illness and death in the United States and worldwide.

One of the most intriguing discoveries by Chen and colleagues revealed a novel paradigm — that artery calcification resembles bone remodeling — and they elucidated the distinct signaling pathways and the crosstalk between the cells involved in the development of atherosclerosis. Her high-impact Circulation Research paper on the key role of an osteogenic transcriptional factor Runx2 in regulating calcification of smooth muscle cells, for example, was a top downloaded paper, says research colleague Louis Dell’Italia, M.D.,associate chief of staff for Research at the Birmingham VA Medical Center and professor of medicine in the UAB Division of Cardiovascular Disease. Her recent Circulation Research paper on novel mechanisms underlying protein O-GlcNAC modification in promoting vascular calcification in diabetes was an editors’ pick and was accompanied by an editorial, Dell’Italia says.

Chen’s other major research arm investigates novel molecular mechanisms responsible for the resistance of pancreatic cancer to therapy. In this effort, Chen and collaborator Jay McDonald, M.D., professor emeritus in the UAB Department of Pathology and a VA physician scientist, have discovered several new modulators in the death receptor signaling pathway that are important in regulating pancreatic cancer cell death, and they have identified new therapeutic compounds that sensitize resistant pancreatic cancer to therapy in preclinical animal models. These novel basic science findings have translational potential to lead to clinical trials and human therapeutics in the future, McDonald says.

Besides Dell’Italia and McDonald, Chen’s research colleagues at UAB and the Birmingham VA Medical Center include Anupam Agarwal, M.D., director of the Division of Nephrology, UAB Department of Medicine, and a funded VA physician scientist; and Paul Sanders, M.D., professor of medicine in the UAB Division of Nephrology, and a funded VA physician scientist.

Chen earned her undergraduate degree at Fudan University, Shanghai, and her Ph.D. at Xiamen University, Xiamen, China. Chen joined the UAB Department of Pathology in 2004 and was promoted to associate professor in 2010 and to professor in 2014. Chen also earned an MBA degree at the University of Vermont during her postdoctoral training.