by Jim Bakken
U.S. News & World Report ranks UAB No. 162 in its 2017 Best Global Universities ranking, up from its rank of No. 200 in 2016 and 269 spots higher than the next-highest-ranked university in Alabama.
As the year draws to a close, UAB News looks back at some of the top stories of 2016. See them all here. 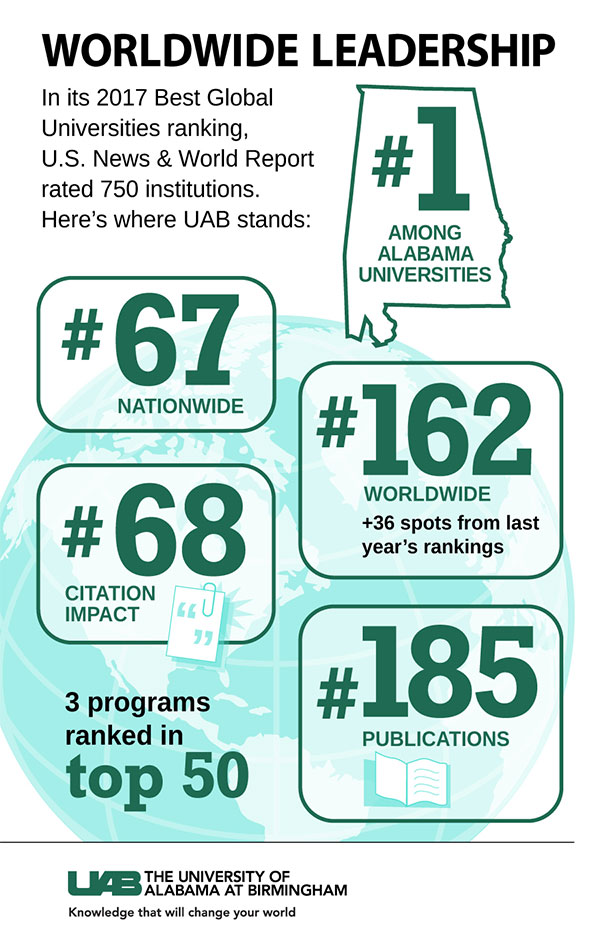 U.S. News & World Report has ranked the University of Alabama at Birmingham No. 162 among its 2017 Best Global Universities, which evaluated 1,000 universities across 65 countries. UAB is ranked No. 67 among U.S. universities and is the top-ranked global university in Alabama by more than 250 spots.

Earlier this year, UAB was ranked No. 147 in the world and No. 1 in Alabama by the Center for World University Rankings.

“UAB has long been recognized in certain circles — particularly in health care — as a world leader,” said UAB President Ray L. Watts. “These now-consistent recognitions on a global scale point to our growing prominence as a comprehensive research university and are a testament to the impactful work our students, faculty and staff are doing across every corner of campus.”

The Best Global Universities methodology — which is based on Web of Science data and metrics provided by Clarivate Analytics InCitesTM — weighs factors that measure a university’s global and regional research reputation and academic research performance using bibliometric indicators such as publications, citations and international collaboration. Each subject ranking has its own methodology based on academic research performance and reputation in that specific area.

“For over 30 years, U.S. News has helped students better understand the range of college options available to them in the United States,” said Anita Narayan, managing editor of Education at U.S. News. “We take the same in-depth approach in our Best Global Universities to help students understand their college options worldwide.”