by Jordan Lessley
Marisa Marques, M.D., receives awards for her commitment to apheresis at UAB. 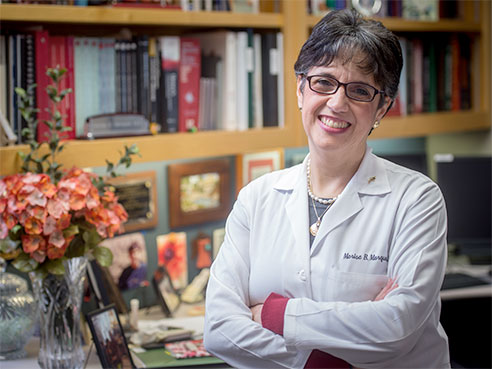 Marisa B. Marques, M.D., a professor of pathologyMarisa B. Marques, M.D., a University of Alabama at Birmingham professor of pathology, has been awarded the American Society for Apheresis 2017 Presidential Award. The award is given to an ASFA member who has made major contributions to the society, performed outstanding services for the society and demonstrated commitment to apheresis.

Apheresis is a medical technology that uses specialized machines to separate the various components of the blood through centrifugation to remove a specific component, or to replace plasma with donor plasma or albumin, for example. “All types of apheresis require that the patient’s blood be collected through a large needle and go into a machine to be centrifuged and have the components separated, with some parts returned to the patient and others — such as the plasma — collected in a waste bag and discarded,” Marques said.

She says apheresis can also be used to collect platelets from normal volunteers to treat patients with cancer, or patients with a decreased number of nonfunctional platelets for various reasons.

Marques attended medical school at the Federal University of Rio Grande do Sul, Brazil. Following graduation in 1983, she trained in internal medicine at the same institution. In 1986, she came with her husband to the United States as a research fellow at the National Institutes of Health in Maryland and at Harvard Medical School in Massachusetts.

They moved to Birmingham in 1993 because J-1 visa holders training in medicine or conducting medical research are required by the United States government to work at a hospital in an underserved area or in a medical position for the government, or to return to their place of origin after seven years in the United States. While her husband worked in Shelby County, which was considered underserved at that time, she completed a residency in pathology and a fellowship in hematopathology at UAB.

Marques learned about apheresis during her residency. When she graduated, there was an opening to work in Transfusion Medicine and Apheresis at UAB. She took the opportunity and never regretted it. “I have encountered thousands of patients treated with apheresis since 1994, and they have inspired and taught me a lot about life and endurance,” Marques said.

Marques believes a primary role of a clinical pathologist is to aid in decreasing diagnostic error by bridging the gap of communication between lab technologists and physicians.

“Improving knowledge about laboratory tests leads to more efficient lab utilization and a decrease in diagnostic error,” Marques said. As a professor of pathology at UAB, she teaches medical students, residents and fellows how to properly order tests for diagnosis and interpret their results in light of the patient’s clinical history.

As an 18-year member and past president of ASFA, she implemented a qualification exam to recognize expert apheresis practitioners, such as nurses, physicians and other clinicians who perform donor and therapeutic apheresis.

As the chair of the Qualification in Apheresis Working Group, Marques marketed the exam to practitioners who are seeking recognition. She also worked with the ASFA Board of Directors to increase the society’s membership to more than 800 members, and coordinated a successful annual meeting with the World Apheresis Association during her term as president-elect of ASFA in 2014.

The Presidential Award will be presented to Marques at the ASFA 2017 Annual Meeting on May 5 in Fort Lauderdale, Florida. Marques plans to attend the ceremony.