The department now has 20 full-time faculty members who brought in $4.3 million in funding in 2016.
Written by: Grant Martin
Media contact: Katherine Shonesy, kshonesy@uab.edu 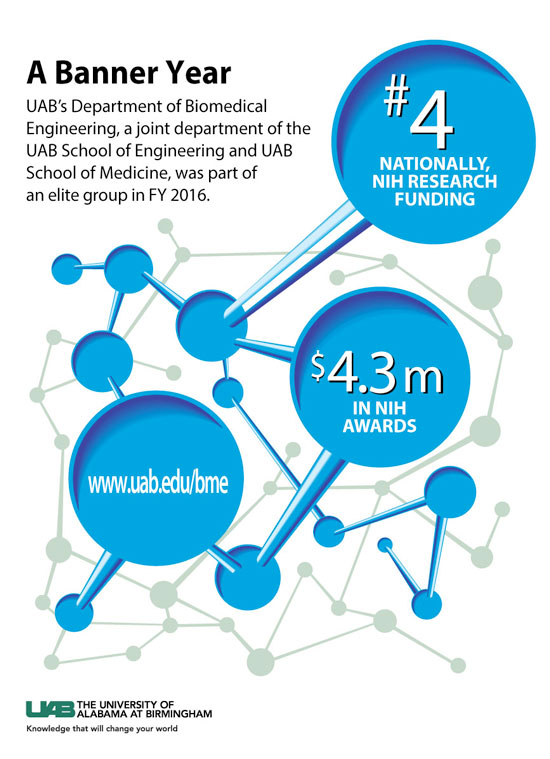 Click to enlargeLong recognized as a leader in biomedical engineering research, the UAB Department of Biomedical Engineering took a big step forward in 2016, ranking in the top five BME departments nationally in the amount of funding it receives from the National Institutes of Health.

With $4.3 million in funding for fiscal year 2016, the department ranks fourth behind the BME departments of Stanford, Johns Hopkins University, and Oregon Health and Science University. The rankings are published by the Blue Ridge Institute for Medical Research, which lists all NIH funding for U.S. medical schools.

The UAB BME Department is included in that medical school listing for the first time, after becoming a joint department in the UAB Schools of Engineering and Medicine in 2014.

That high ranking is due in large part to department chair Jianyi “Jay” Zhang, M.D., Ph.D., who brought substantial funding when he was hired in 2015.

“The department’s receipt of NIH funds in 2016 was largely the result of BME faculty’s winning new UO1, RO1 and R21 grants,” said Zhang, who also holds the Michael and Gillian Goodrich Endowed Chair of Engineering Leadership. “Additionally, by recruiting four new faculty with NIH funds, we continue to improve the quality of our department as we strengthen our research. I congratulate all of our faculty for their recent achievements, and I extend our sincere appreciation for their tireless efforts and continued support.”