by Jordan Lessley
Tina Simpson, M.D., and Marisa B. Marques, M.D., have been recognized by the American Medical Women’s Association for going above and beyond to guide medical students, residents and fellows. 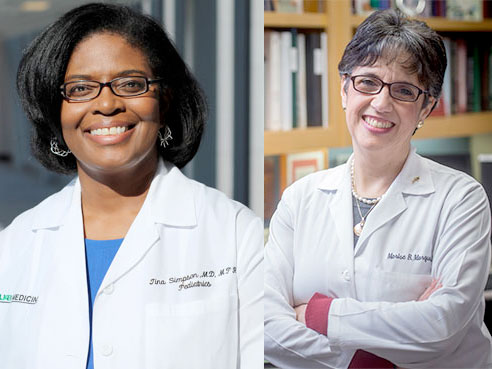 This award celebrates those who have made an impact on the lives of medical students and physicians in training, going above and beyond what is required, and actively reaching out to those around them to help guide students in their career paths.

“Over the years, I have had such influential mentors and take great pleasure in being able to provide similar encouragement and support to students and trainees,” Simpson said.

Simpson says, while she has never expected any type of acknowledgement for her mentoring efforts, she is truly grateful that someone found her work to be commendable.

Marques says she is humbled by the opportunity to mentor young physicians at UAB, appreciates her friends’ and colleagues’ nominations for the Exceptional Mentor Award, and is honored to know her efforts are recognized as worthy. “Mentoring takes time and energy, and I do it because it is meaningful to me,” Marques said.

Simpson and Marques will be presented their awards during the AMWA’s 102nd Anniversary Meeting on Saturday, April 1, in San Francisco.