by Jordan Lessley
The highly-selective program provides fully-paid summer research opportunities for students at some of the country's premier institutions. 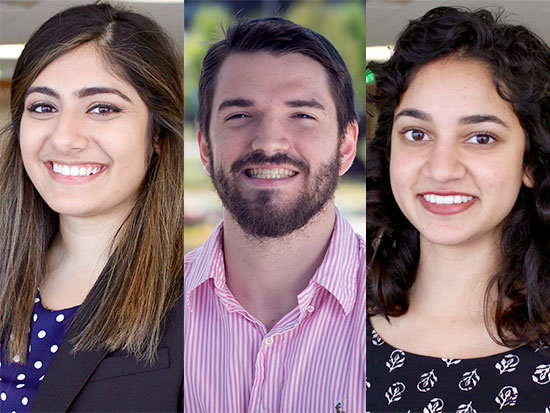 From left: Niharika Loomba, Cody Savage and Jasmin RevannaFor the fourth year in a row, students from the University of Alabama at Birmingham have been selected for the Amgen Scholars U.S. Program. This year, three students will take part in the highly selective program, which provides 200 undergraduates with fully paid summer research opportunities at 10 of the nation’s premier educational institutions.

The Amgen Scholars summer program is funded by a 12-year, $50 million commitment from the Amgen Foundation to support student research at world-class institutions. The program aims to increase student interest in pursuing advanced training and careers in the sciences.

Niharika Loomba, a neuroscience teaching assistant in the College of Arts and Sciences’ Department of Biology, will conduct research at Stanford University’s SSRP-Amgen Scholars Program. “Receiving this incredible opportunity has helped me take one step closer toward achieving my dream of becoming a neuroscientist,” Loomba said.

“During my time at Stanford, I hope to explore new areas of science,” Loomba said. “I am always eager to learn new things, so immersing myself in science for this nine-week program is really exciting.” Loomba says she is looking forward to networking with students and scientists from across the country and is appreciative of her mentors and peers at UAB who have helped her achieve this goal.

Jasmin Revanna, a neuroscience student studying epigenetic mechanisms at UAB’s Department of Neurobiology, says she was ecstatic when she received her acceptance into the Caltech Amgen Scholar Program.

“The project I proposed aims to create an animal model for autism spectrum disorder while utilizing the CRISPR/Cas9 genome editing tool,” Revanna said. “While at Caltech, I hope to gain experience working with nematodes, which is something I have never done, while making use of the lab techniques I already know.” She hopes this opportunity will open the door for bigger opportunities and ultimately increase her chances of acceptance into graduate school. Both Loomba and Revanna are students in the UAB Honors College.

Cody Savage says he is deeply honored to have been chosen to be an Amgen Scholar. Savage is a neuroscience major graduating in the fall with dreams of pursuing a career as a biomedical scientist. During his time as an undergrad, he had many research opportunities ranging from genetic studies to electron microscopy.

“I hope to gain knowledge of new experimental techniques, develop an interesting research project and soak up as much information as possible from the distinguished scientists at Washington University in St. Louis,” Savage said.