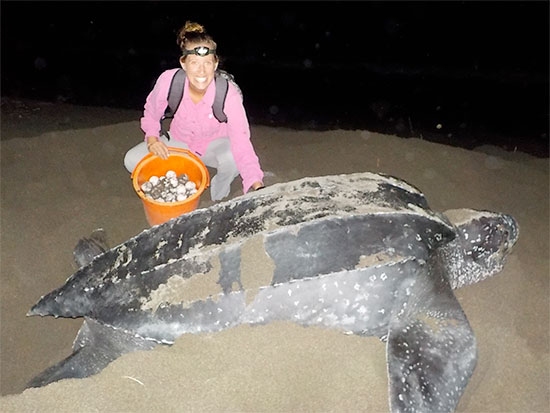 Amy Bonka, a Ph.D. biology student at the University of Alabama at Birmingham, has recently received a National Geographic Early Career Grant.

Bonka, who works with Department of Biology professor Thane Wibbels, Ph.D., in the College of Arts and Sciences, is studying the biology and ecology of the two most endangered sea turtles in the world— the Kemp’s ridley sea turtle in the Gulf of Mexico and the Pacific leatherback sea turtle in Indonesia. Her work with the Bi-National Kemp’s Ridley Conservation Program has included spending several nesting seasons living and conducting research at the primary nesting beach for this critically endangered sea turtle located in a remote area of Tamaulipas, Mexico.

Bonka has also been conducting research on the Pacific leatherback sea turtle in Bird’s Head, Papua Barat, Indonesia. Bird’s Head is the last remaining stronghold for the nesting of this critically endangered sea turtle in the western Pacific. The research in Indonesia has been conducted in collaboration with Ricardo Tapilatu, Ph.D., a faculty member at the State University of Papua and an alumnus of the Department of Biology at UAB. The research involves traveling by small boat to field camps that are located on remote nesting beaches that are bordered by undeveloped jungle and pristine waters.