by Jeff Hansen
This award from the AABB honors the top paper published in the journal Transfusion. 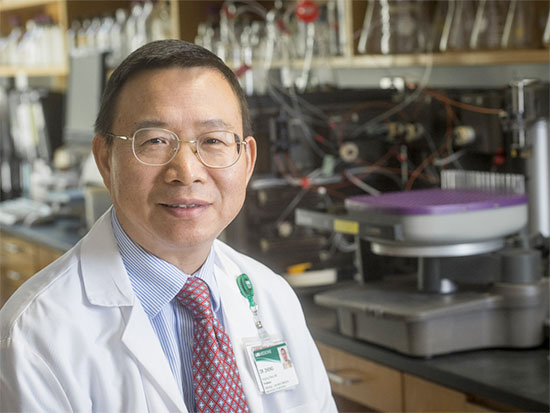 Long Zheng, M.D., Ph.D., the Robert B. Adams Endowed professor and director of the Division of Laboratory Medicine at the University of Alabama at Birmingham Department of Pathology, has been honored with the 2017 RISE Award from the AABB.

The RISE Award, or Research Innovation in Scientific Excellence Award, is given to the authors of the best original research article published each year in the journal Transfusion, as measured by impeccable study design, innovation, significance and effective communication.

Zheng and former colleagues at the University of Pennsylvania were recognized for their paper, “ADAMTS13 autoantibodies cloned from patients with acquired thrombotic thrombocytopenic purpura: 2. Pathogenicity in an animal model.”

Acquired thrombotic thrombocytopenic purpura, or TTP, is a rare autoimmune disease that creates sudden pain in the abdomen or head and extreme fatigue or confusion, sending a patient to the emergency room with a potentially fatal condition. These symptoms come from a multitude of blockages of tiny blood vessels in the gut and brain, formed after the patient’s own immune system somehow inhibits an enzyme that is vital to control clotting.

Treatment involves exchanging three to seven liters of plasma each day, at a cost of $10,000 a day, and this costly care may continue for several weeks or months.

In their paper, Zheng and colleagues said their results demonstrated “for the first time the ability of human recombinant monovalent anti-ADAMTS13 antibody fragments to recapitulate key pathologic features of untreated acquired TTP in vivo, validating their clinical significance and providing a useful animal model for testing novel targeted therapeutic approaches.”

The AABB is an international association representing individuals and institutions involved in the fields of transfusion medicine and cellular therapies. The AABB is dedicated to advancing transfusion and cellular therapies worldwide. Members include physicians, nurses, scientists, researchers, administrators, medical technologists and other health care providers in more than 80 countries.

The AABB was formerly known as the American Association of Blood Banks.