Erica Webb has been named a finalist for the prestigious scholarship; winners will be announced April 20. 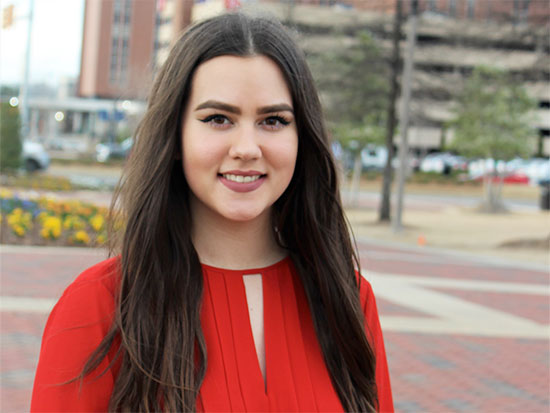 Erica Webb, a University of Alabama at Birmingham junior from McCalla, Alabama, is a finalist for the highly competitive Truman Scholarship.

The award is one of the country’s most prestigious national graduate fellowships, given annually to college juniors who have demonstrated exceptional leadership potential and academic achievement, and who are committed to careers in government, the nonprofit or advocacy sectors, education, or other public service. The scholarship provides $30,000 toward graduate education and professional development for young people dedicated to public service.

Webb is one of 194 finalists selected from more than 750 students. UAB has produced six Truman Scholars and 12 finalists.

“Erica’s advocacy for women’s rights and commitment to public service impressed our faculty nominating committee,” said Ashley Floyd Kuntz, Ph.D., director of national and international fellowships and scholarships at UAB. “She is the type of leader who turns good ideas into tangible initiatives. We believe she exhibits exceptional promise to be a change agent in her professional and civic life.”

Webb is double-majoring in English and political science in the UAB College of Arts and Sciences. She is a member of the UAB Honors College Global and Community Leadership Program and the Pre-Law Program at UAB.

“I aspire to work with the United Nations Population Fund as an international policy adviser, specializing in the U.N.’s Sustainable Development Goal of gender equality through sexual and reproductive health care,” Webb said. “I grew up in a rural area with conservative roots. I saw an extreme need for reproductive justice. Simply talking about sexual health could cause an uproar. Rather than hold me back, the stigma and lack of access I faced emboldened me to now help meet these needs here and in rural areas across the globe.”

The 2018 Class of Truman Scholars will be announced April 20.