by Alicia Rohan
SAFER Barriers, an invention from the UAB School of Engineering, have been honored for their safety innovation by SAE International. 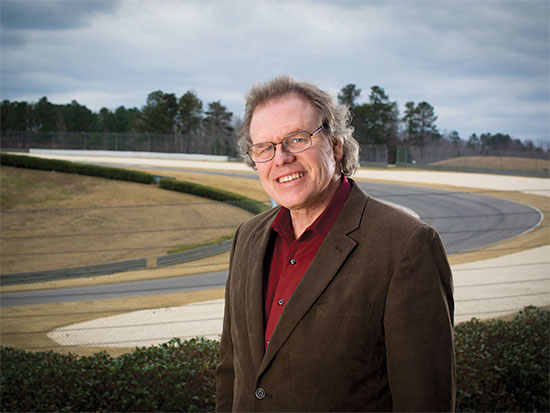 The SAFER Barrier has been saving lives for more than a decade at NASCAR and IndyCar circuits across the United States, as well as in the European circuit. On April 11, SAE International honored the team that created the Steel Foam Energy Reduction Barriers with the 2017 SAE John Melvin Motorsports Safety Award, which includes Dean Sicking, Ph.D.,

Sicking, a leading figure in highway safety research for more than 30 years, has led a research team at the University of Alabama at Birmingham School of Engineering since 2012.

“It is an honor to receive this national award recognizing safety innovations in racing,” said Sicking, professor in the UAB Department of Mechanical Engineering. “Dr. Melvin is a longtime mentor of mine starting when I was a graduate student. His leadership and expertise in occupant kinematics and injury causation influenced the next 30 years of careers.”

The effect of SAFER Barriers has been apparent in American auto racing over the past decade. The deaths of high-profile drivers such as Adam Petty in 2000 and Dale Earnhardt in 2001 led to a push for safety modifications that resulted in SAFER Barriers’ being installed at every IndyCar and NASCAR course by 2005. Since then, there have been no fatal wall crashes in those events. In fact, drivers, such as ARCA racer Brad Smith, have survived horrific crashes at full throttle — impacts that almost certainly would have been fatal prior to the barriers’ installation.

Established in 2016, the SAE John Melvin Motorsports Safety Award honors individuals, organizations or teams (both SAE members and nonmembers) whose research and/or practical application represents unique, original concepts that, when applied to motorsports, cause significant positive change and elevate safety to new levels of innovation, in the memory of John Melvin, Ph.D. This award is funded by the generous support of NASCAR to honor Melvin’s memory.