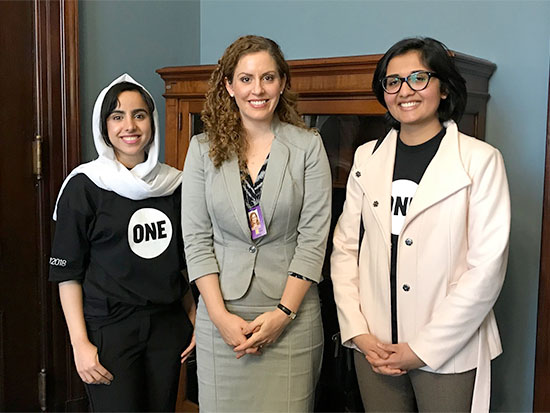 UAB students Nuha Hamid, left, and Aleena Khan met with Sarah Kate Sullivan, center, a staff member of Sen. Doug Jones. They may be in Birmingham, but the efforts of two students are making a difference in the lives of millions of people around the world, thanks to their work with the ONE Campaign and its chapter at the University of Alabama at Birmingham. The campaign, which was founded by Bono, lead singer for the rock band U2, has 9 million members worldwide and chapters at hundreds of college campuses. It aims to end extreme poverty and preventable disease.

Aleena Khan and Nuha Hamid, students at UAB and leaders of its ONE Campaign chapter, attended the ONE Power Summit in Washington, D.C., to learn how they can help reduce poverty and disease by lobbying lawmakers and raising awareness about global health issues.

During the three-day summit, they received briefings on current issues and advocacy training and listened to global health experts from around the world. They also spent a day on Capitol Hill, where they met with the staffs of Sen. Doug Jones, Sen. Richard Shelby and Rep. Terri Sewell.

“Every year, our nation’s international affairs budget helps combat global poverty by saving millions of lives and helping millions of people,” said Hamid, a public health major in the School of Public Health at UAB. “We told them why students at UAB want our leaders to do more to champion a strong international affairs budget that does the most good and helps the most people.”

Khan will take over from Hamid as the leader of the UAB chapter this summer. She says the conference helped her define her goals for the future of the group.

“I want to get more people involved on campus,” Khan explained. “I want more people to know about ONE because a lot of people don’t know what we do; but once they find out, they want to get involved. I want to provide them the resources and tools to get them involved from the start.”

Hamid has led the ONE Campaign’s chapter at UAB for the past two years. Since her time with the organization, she has seen several bills pass that she has championed, one of which is the Reinforcing Education Accountability and Development Act, also known as the READ Act. The legislation, signed into law in 2017, provides access to education for more than 260 million children who are not in school or do not have access to school. The cause is something that hits close to home for both women.

“My family is from Pakistan,” Khan said. “I have a lot of family members who live in poverty. I’ve been back there, and I’ve seen how living for them is very difficult, especially for my younger cousins who are trying to get an education and also provide for their families.”

Hamid, whose family is from Lebanon, says she’s seen the impact of the READ Act in her own family.

“I have been receiving news of what’s happened with my family, who is still living overseas,” Hamid said. “Now, young girls who haven’t been able to get an education are able to both go to school and get a quality education.”

As for the future, both Khan and Hamid want to continue to reduce poverty. Hamid wants to earn her Ph.D. in epidemiology with a focus on mental health care. Khan says she wants to become a human rights lawyer.

“I want to work on international issues,” Khan said. “I am really passionate about women and girls’ education and their status in society.”