by Shannon Thomason
The awards are for Samantha Richardson’s work for the Fountain Heights community, which she completed as a student. 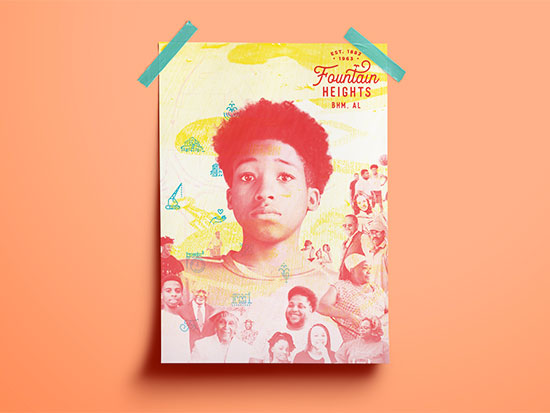 The awards are for Richardson’s work for the Fountain Heights community, which she completed as a student in the College of Arts and Sciences’ Department of Art and Art History. In March, Richardson won two Student Gold ADDYs presented by the American Advertising Federation of Birmingham in the Printed Annual Report or Brochure campaign and in the Integrated Brand Identity Campaign for the project. She was also named Birmingham’s Best of Show in the Student category for it.

In April, Richardson won two Student Gold ADDYs at districts in Jackson, Mississippi, as well as the Mosaic award, which recognizes individuals whose commitment to diversity and inclusion is evident through their creative work and initiatives.

Richardson is an art director and production artist at Cayenne Creative. During her undergraduate experience at UAB, her research focused on creating awareness about underprivileged communities in the city. In the spring of her freshman year, she co-directed “Another Day in the Neighborhood,” a documentary about two public housing communities impacted by poor conditions. In her junior year, she worked on a branding campaign for the Foot Soldiers, a civil rights activist group aiming to establish itself as an information center in the Fourth Avenue business district.

Richardson spent a semester in the Department of Art and Art History’s BLOOM Studio conducting initial research on the Fountain Heights neighborhood, and spent another semester creating work in response to her research. Richardson’s integrated campaign aims to achieve public awareness to preserve one of Birmingham’s most historically influential neighborhoods.

“I was initially interested in the area’s rich history as an entertainment district and a birthplace of the civil rights movement,” Richardson said. “When I learned about the underserved community just north of the highway, I became fascinated by their story. I drained the internet of everything I could find, including UAB Professor Pamela King’s research, as well as ‘Blocked,’ a documentary produced last semester by UAB students Susanna Swanson and Amber Pope.”