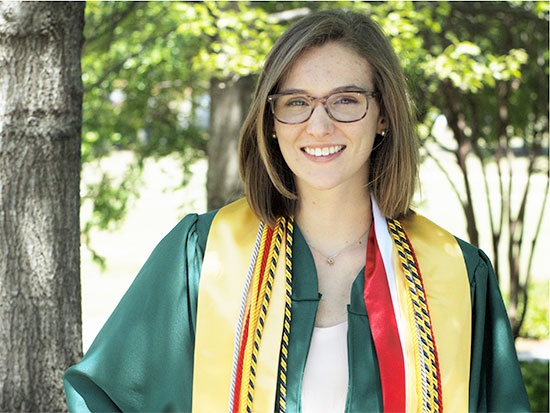 Hamilton will be formally recognized at the 100th Annual Conference of the AATSP in Salamanca, Spain on June 27.Cayla Hamilton, a Montgomery, Alabama, native and alumna of the UAB College of Arts and Sciences, has been awarded the Mario Vargas Llosa Award by the National Spanish Honor Society, Sigma Delta Pi.

“I am so honored and humbled to have been chosen,” Hamilton said. “This would not have been possible without the incredible faculty of the UAB Department of Foreign Languages and Literatures. Through my four years, they helped me learn and excel in every way. Even after graduation, the Spanish professors are still supporting and encouraging me.”

Hamilton served as a resident assistant and UAB student ambassador during her time at UAB. She was also a member of the Spanish Film Club and Art History Club and studied abroad in Puerto Rico. She plans to pursue a master’s degree in foreign language education.

The Mario Vargas Llosa Award is given in conjunction with the National Collegiate Hispanic Honor Society, and the American Association of Teachers of Spanish and Portuguese. Hamilton will be formally recognized at the 100th Annual Conference of the AATSP in Salamanca, Spain, during the AATSP’s Awards Banquet on June 27.