by Savannah Koplon
A pediatric neurology researcher has been awarded a substantial grant to study a neuromuscular disease further. 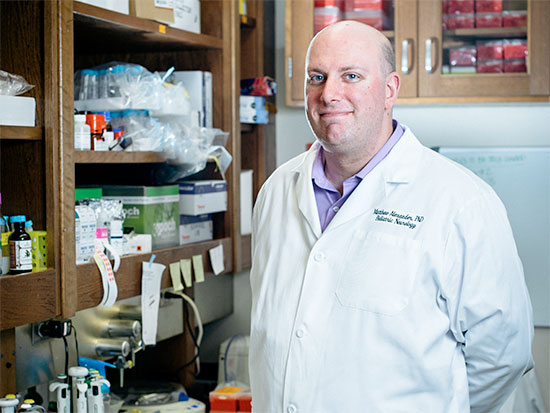 Matthew Alexander, Ph.D., assistant professor of pediatric neurology at the University of Alabama at Birmingham and Children’s of Alabama, has received an R01 grant from the National Institutes of Health to study Duchenne muscular dystrophy and the potential of a molecular pathway to be manipulated for therapeutic benefit.

The five-year, $1.25 million grant is funded by the NICHD-Eunice Kennedy Shriver National Institute of Child Health and Human Development. Alexander and his team will aim to determine whether miR-486, a key microRNA that is dysregulated in Duchenne muscular dystrophy, can be manipulated in dystrophic mice for therapeutic benefit.

Duchenne muscular dystrophy is a genetic disorder characterized by progressive muscle degeneration and weakness. It is caused by the absence of dystrophin, a protein that helps keep muscle cells intact. The disease primarily affects boys and presents symptoms in early childhood.

“We believe that the miR-486/DOCK3 pathway can be used as a biomarker for the DMD disease progression to monitor both DMD disease severity and therapeutic outcomes of DMD therapeutics,” Alexander said. “We are also exploring whether overexpression of miR-486 can be therapeutically beneficial for blocking DMD-associated symptoms and used in combinatorial gene therapy testing with other gene therapies currently being evaluated in clinic trials.”

According to Alexander, studies like these will help further support the roles of non-coding RNAs (ncRNAs) in regulating disease states and as potential targets for drug development.