School of Optometry professor receives a grant to develop methods of slowing the progression of myopia, also known as nearsightedness. 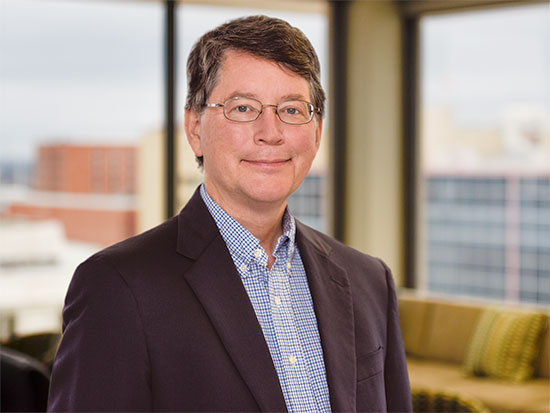 A team of researchers at the University of Alabama at Birmingham’s School of Optometry have been awarded a $1.5 million R01 grant to investigate ways to reduce the development of myopia, also known as nearsightedness.

Timothy Gawne, Ph.D., associate professor of optometry and vision science, was awarded the grant by the National Eye Institute based on research that suggests exposure to narrow-band red light can slow axial elongation.

Myopia affects more than 40 percent of the United States adult population. It occurs when the axial length, or distance from the front of the eye to the back, is too long for the optical power and causes objects at a distance to be out of focus. The elongated axial length of the myopic eye is a major risk factor for the later development of serious retinal disease. The project will examine whether the red lights act like optical STOP signals during the development phase, slowing lens-induced myopia.

“The eye uses visual cues to actively regulate its growth in childhood up through early adulthood, optimizing its length in order to achieve good focus,” Gawne said. “Our preliminary results suggest that exposure to red light is both powerful and non-harmful, and we want to further investigate whether red light has the potential to become a clinical therapy for children.”

The grant is one of approximately 350 awards funded by the NEI out of more than 1,500 submissions considered annually.