by Shannon Thomason
Dawson, a junior majoring in neuroscience, also won the Interview and Talent awards and was awarded $2,900 in scholarships. 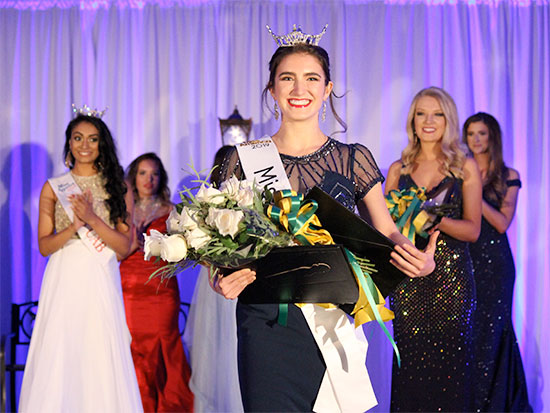 Dawson, a junior majoring in neuroscience in the College of Arts and Sciences, also won the Interview Award and Talent Award, for dance. She won $2,900 in scholarships. She is the daughter of John and Rebecca Dawson.

The Miss UAB Scholarship Pageant is an official preliminary to the Miss Alabama and Miss America pageants. The pageant was held in UAB’s Alys Stephens Performing Arts Center with the theme “City of Stars.” The emcee was Miss Alabama 2018 Callie Walker, who also performed; the evening also featured performances by the UAB Golden Girls and Silent Crocs. UAB Student Involvement and Leadership presents the pageant.

The first runner-up is Julianna Moreno, who also won the Lifestyle and Fitness Award and was named Miss Congeniality. Moreno is a senior majoring in communication studies in CAS. She is the daughter of Chris Moreno and Julie Moreno of Mount Olive, Alabama. She was awarded a $900 scholarship.

The second runner-up is Taylor Grace Eustice, who also won the Community Service Award. Eustice is a sophomore majoring in biomedical sciences in the School of Health Professions. She is the daughter of Kim and Travis Eustice of Kimberly, Alabama. She was awarded an $850 scholarship.

The third runner-up is Katie Causey, a junior majoring in biomedical sciences. She is the daughter of Tammy and Dave Donaldson of Tuscaloosa. She was awarded a $500 scholarship.

The fourth runner-up is Amya Love, a freshman majoring in biomedical sciences. She is the daughter of Kesha Love and Kelly Love of Chicago, Illinois. She was awarded a $400 scholarship.

Miss UAB received a gift certificate from Southern Exposure Photography, a year of free workout classes from True 40 Fitness Studio and complimentary hair styling from Hannah Holsomback. All winners were awarded certificates and flowers, as well as a gift from Kendra Scott.