Sure, 3D printers may be a hot item in tech circles, but the humble office inkjet machine doesn’t attract much attention, except when a cartridge needs to be refilled. But a clever hack from a UAB expert in circuit design can expand the skillset of old hardware far beyond printing memos. With special nanoparticle ink and some careful tweaking of software settings, Mohammed Haider, Ph.D., can crank out pages of fully functional circuits for as little as $0.30 apiece. Commercial nanoparticle printers are available that could do the same thing, Haider notes, “but they cost $50,000.” 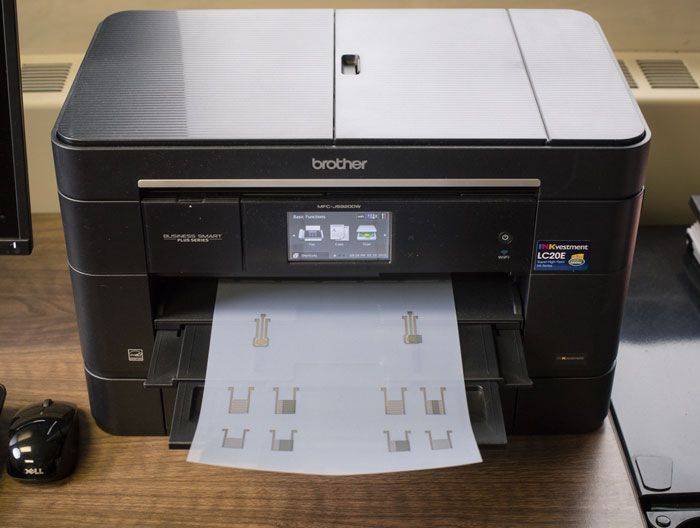 What could you do with a cheap, flexible sensor circuit? Mohammed Haider envisions everything from personalized diet guidance to simple alerts that register when takeout coffee is too hot to drink.


In a new paper in the journal IEEE Sensors Letters, Haider demonstrates that these cheap circuits can accurately measure breathing rates by sensing the slight temperature differences between inhaled and exhaled air. By wrapping the flexible circuit inside a simple tube, and connecting it to a nearby laptop, Haider created an inexpensive system that could make out-of-hospital respiration monitoring a viable option for more patients with chronic conditions such as heart disease, diabetes or suspected sleep apnea.

Before doctors order expensive, disruptive overnight tests for a patient suspected of having sleep apnea, for example, they could use Haider’s system to determine if a patient was truly at risk. “It’s hospital-level monitoring at home,” says Haider, an associate professor in the Department of Electrical and Computer Engineering in the UAB School of Engineering.

Portable home monitoring devices are already available but have significant limitations: those based on pressure sensors are bulky and uncomfortable, while those built around acoustic sensors can be fooled by patient coughs or other body noises. Haider’s printable sensors, meanwhile, are stable, cheap and easy to fabricate. 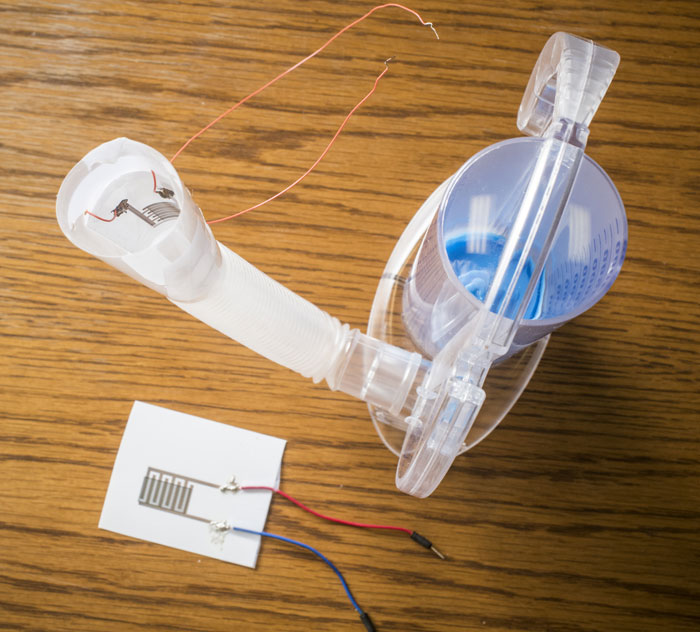 The flexible paper-based nanoparticle circuits that Haider prints on his office inkjet printer can accurately monitor respiration rates compared with the traditional spirometer (above), as he demonstrated in a new report in IEEE Sensors Letters.

Haider envisions a wide range of uses for his inkjet circuits. They could be printed onto the sleeve of takeout coffee cups to warn you before you burn your tongue, for example. Other inks can detect oxygen and carbon dioxide; they could be used to give you an accurate picture of your total energy expenditure — a boon for dieters. By using piezoelectric ink, Haider has even made versions that tap external vibrations to generate electricity. “They are self-powered,” he says. “If you placed them on a turbine body or car engine, where there is this inherent motion all the time, it can capture that energy and then form a sensor network.”


Haider’s Bioinspired Integrated Circuit Design Lab is looking for alternatives to traditional circuit architecture, especially for healthcare and Internet of Things (IOT) applications. Contemporary circuits are designed for general performance, and “they use too much power,” Haider says. For implantable devices, or sensors designed to be deployed in the thousands, “the major goal is to create energy efficiency and lifelong reliability.”

Based on the brain

Instead of giving each sensor its own power-hungry computer chip brain, Haider is looking to human neurons for a smarter design. He has developed networks of oscillators operating at slightly different frequency ranges. Each oscillator is coupled with the neighboring oscillators and the coupling strength between any two oscillators is controlled by a sensor. When the sensors detect a problem, the network changes the synchronization frequency and the issue can be detected extremely quickly — in a matter of milliseconds. “The network itself is telling me there’s a problem,” Haider says. “There is a pattern stored for the network, and whenever there is an abnormality, that loss of synchronization indicates the issue. We are capturing data and doing network-level computation with it.” 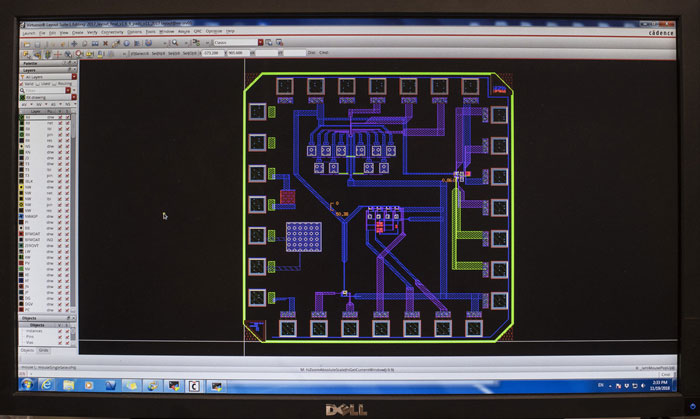 In Haider's lab, new types of low-power circuits go from design to application. The chip design shown above contains a low-power sensor instrument that converts sensor-generated current into digital pulses. The miniaturized chips are only 4mm x 4mm. (A batch of chips fabricated for Haider by circuit service provider MOSIS is shown at bottom right, and a single chip is installed on a circuit for testing at bottom left).


The human brain is never working with a single neuron at a time, he explains. “There are maybe a thousand together that do the job of recognizing a face. If you put that algorithm into a computer, it takes five minutes, but the brain does it in a split second.” The great paradox of the brain, from an electrical engineer’s point of view, is how it does so much with relatively inefficient hardware. “Each individual neuron is fairly poor-performing,” says Haider — “moderate to low reliability. But with their massive numbers, they can outperform our supercomputers. We are trying to find new architectures for computer circuits. So how about looking to nature for ideas?”

Haider was recently awarded a three-year, nearly $450,000 grant from the National Science Foundation to explore his solution to a related concern: What do you do with all the data generated by our sensor-packed world? The first phase of the grant will focus on data-reduction measures like Haider’s neuron-inspired network-level computations. The second phase will test an encoding scheme that uses a set of unique pulses to pack more data into a transmission. “We will be able to transmit a higher volume of data without requiring additional bandwidth,” Haider says. “This is a sort of data compression and transmission scheme without requiring complicated digital algorithms.” With this scheme, burst transmissions of only a few seconds duration to hovering drones could enable citywide data collection from thousands of sensors in a few hours without swamping cities’ already overloaded data cables.

The speed boosts could also take these advances back to their inspiration: the human brain. “It’s not currently possible to map all the data generated by the 22 billion neurons of the brain in real time,” Haider says. “With regular data transmission methods, it would take several days.”

Haider turned to office inkjets to overcome another challenge: the costs of manufacturing traditional circuits for testing. “I started my career working on implantable glucosensors for diabetes,” he says. “I fabricated several integrated chips and was trying to move them to the next level, but they are super-expensive. I saw publications about [conductive] nanoparticles that were less than 50 nanometers and I thought: we can pass those through my printer.” After four and a half months of trial and error, including many long nights at home tweaking printer profiles, Haider had a successful circuit. “It was frustrating, but always interesting. I was getting something — that kept me going.”