How much should an elephant weigh?

The answer to that question could help zoos solve a growing fertility crisis — and offer new insight into the lives of these majestic creatures. Find out how UAB researchers, working with scientists from the Smithsonian Institution, are exploring two ways to measure body fat in African elephants.
Written by: Matt Windsor
Media contact: Adam Pope 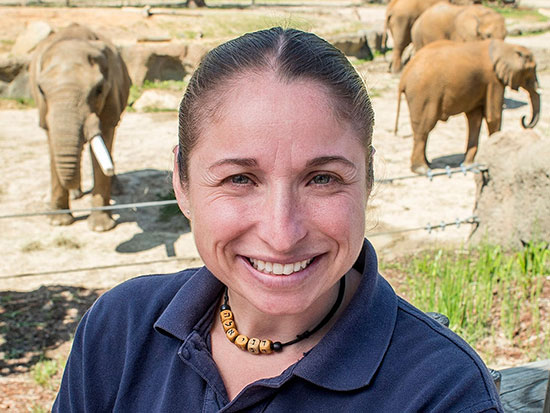 Daniella Chusyd loves elephants, but the less she sees of them, the better. That’s because overweight elephant females, like their human counterparts, may have a more difficult time conceiving babies, while also developing other health problems associated with excess fat.

That’s a problem, because zoo elephants are seemingly fat and increasingly infertile. In 2013, researchers from the Smithsonian Institution’s Conservation Biology Institute developed a ranking system known as the body condition score. Essentially, they use photos of elephants’ backsides and sides to visually assess their condition. The scale runs from 1 to 5, with 1 being too skinny, 3 being ideal and 5 being obese. In zoos, the researchers found, about 75 percent of elephants are either a 4 or a 5. In the wild, about only 25 percent of animals are in that range; the majority are 2s.

Most zoos regularly weigh their elephants. Unfortunately, that number alone doesn’t tell you much. “An elephant’s weight can fluctuate up to a few hundred pounds per day,” said Chusyd, a doctoral student working in the lab of Timothy Nagy, Ph.D., in the UAB Department of Nutrition Sciences. Nagy is an expert in the effects of body composition on human and animal obesity. Chusyd is collaborating with Smithsonian scientists to do something that has never been done before: develop a method to more accurately calculate body composition in elephants. Then she plans to examine the links among body composition, inflammation and infertility in female African elephants.

“The body condition score is great, but it doesn’t differentiate between fat mass and lean mass,” said Chusyd, who is also a fellow in the UAB Nutrition Obesity Research Center. “Fat itself is an endocrine organ; it secretes proteins and hormones, particularly pro-inflammatory proteins, and inflammation may be associated with reproductive problems in elephants, just as it is in humans.”

Working with Nagy and the Smithsonian’s Janine Brown, Ph.D., and Kari Morfeld, Ph.D., Chusyd settled on deuterium, also known as “heavy water.” The elephants get an initial blood draw, then eat deuterium-soaked bread, which circulates throughout their bodies. Several hours later, a second blood draw is taken. Using a mass spectrometer, Chusyd compares the two samples, measuring the total body water, which is related to lean mass. By subtracting the lean mass from the elephant’s weight, she can estimate the animal’s fat mass. 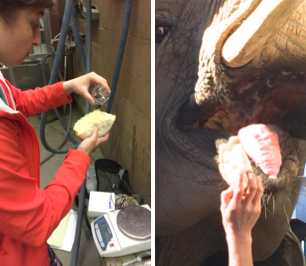 Chusyd first soaks bread in deuterium; then a keeper tosses it into the elephant's mouth.The Birmingham Zoo has only male African elephants (known as bulls), but the staff allowed Chusyd to evaluate her method there. The blood draws weren’t a problem. “The trainer says ‘ear’ and the elephant comes over to the side of the enclosure and presents his ear,” Chusyd said. “Elephants typically have large veins, and they're good ‘patients,’ so it’s usually much easier to draw blood from them than from a human.”

Getting the elephants to swallow their deuterium wasn’t so simple. “Everything we’re doing hasn’t been done before in elephants,” Chusyd said. “We wanted to use a large syringe to squirt the deuterium in their mouths, but that didn’t work; it just spilled back out. Then we tried pouring the water in his mouth using a cup, but that too spilled out. And we can’t have any spills, because we need to know exactly how much they got in order to do the calculations properly.”

So Chusyd settled on a different approach: soaking large chunks of bread in the deuterium “The keeper just tosses the bread straight into their mouths,” Chusyd said. 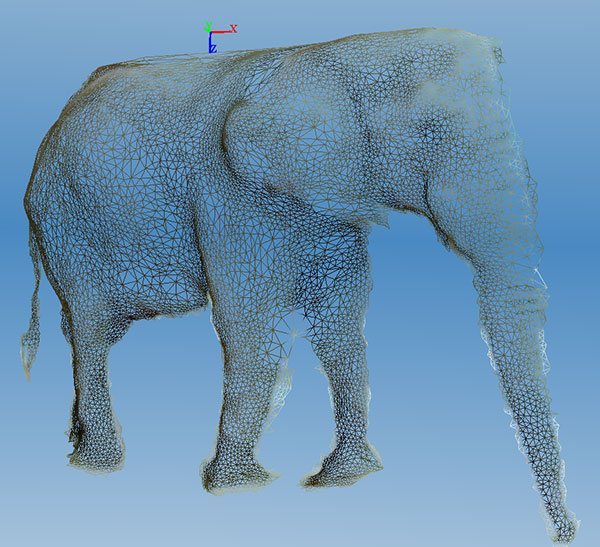 This three-dimensional wireframe model of an elephant was created from a series of two-dimensional images.

Chusyd is also developing two noninvasive approaches — photography-based methods that she has adapted from the Photobody work done by UAB’s Olivia Affuso, Ph.D., an associate professor in the Department of Epidemiology. One approach uses two-dimensional images of the side and rear of the elephant. The other uses eight cameras — four point-and-shoot cameras and four Lytro cameras — set up around the animal to create a three-dimensional model. Mark Bolding, Ph.D., a 3-D imaging expert in the Department of Radiology’s Division of Advanced Medical Imaging Research, then calculates fat mass using those images. Chusyd is validating these measures against the deuterium method.

“Ideally, we could use something like this in the field,” Chusyd said. “You need body weight as well; but after speaking with some faculty members in the School of Engineering, I think in the future we should be able to construct something to directly measure body weight in the field.”

If elephants are overweight, why not just feed them less? It isn’t that simple, Chusyd explains. “All the zoos that we’re working with are certified by the Association of Zoos and Aquariums, which has established food standards,” she said. (Because dietary research in elephants is limited, the AZA portion sizes are based on a scaled-up version of those used for horses.) “But people respond to diets differently, and we can assume that elephants are the same way.” African elephants in zoos come from widely disparate geographic regions, “and the wild diet of elephants from South Africa can be different from that in East Africa, for example,” Chusyd said. Genetics, race and other factors influence how an individual human partitions food energy, she explains. “Maybe this is a reason for different physiological responses to diet in elephants.”

In the wild, elephants eat mainly “browse” — a mix of leaves, branches and roots. Zoo elephants mostly get hay, grain and produce, along with treats used for positive reinforcement: apples, carrots, sweet potatoes and alfalfa cubes.

“It’s not straightforward in terms of how much you give each elephant,” Chusyd said. “Some individuals likely burn more and store less energy; for others it’s the opposite. In humans, we have the paleo diet, the South Beach diet, the low-carb diet, and everyone is arguing about which is best. We spend so much money looking into this for people, and there are still so many question marks.”

In fact, Chusyd said, “overnutrition” is more accurate than obesity, “because we haven’t measured it yet, and we don’t really know what it means for an elephant to be obese.”

Chusyd now has data on 21 elephants at six zoos across the country. She plans to collect data from 26 or 27 elephants at eight zoos in all. Chusyd travels to all the zoos herself, explaining the test procedures to the keepers. Since she needs to wait several hours in between blood draws, she has plenty of time on her hands. “I try to help the keepers in any way I can, spreading out food, shoveling, cleaning up — whatever they need,” Chusyd said. “I love it. All of the zoos have been so welcoming. I even had an elephant paint a picture for me.”

Because her samples need to be kept below freezing, Chusyd’s first stop after she leaves a zoo is the nearest grocery store. She buys a bag of dry ice and brings it out into the parking lot, hammering it into the right shape for her storage coolers. If the zoo is too far to drive to, she will fly and ship the samples back to Birmingham.

The work is very exciting, Chusyd says. “This opens the door to a lot of things.” For example, human males with extra fat have lower sperm counts. “Could that be true for elephants as well?” Chusyd said. “We’ve also had zoos ask us about doing this in other species, such as rhinos.”

Zoos could use these techniques to track changes in body composition for their animals, Chusyd says. “When there are large fluctuations in weight, is it due to changes in fat or lean mass? This will give us a better overall picture of the physiology of the elephant.

“I’m very passionate about elephants,” Chusyd added. “I want to keep evolving this research. It’s such a unique and novel topic, and so many people could benefit from it. Anyone who works with large animals can adapt these techniques to suit their needs. I want to help those who, like the elephant, don’t have a voice.”