When the machines come for government jobs, will efficiency crush equity?

Study finds that women and minorities could bear the brunt of layoffs in state and local government as automation increases.
Written by: Matt Windsor
Media contact: Yvonne Taunton 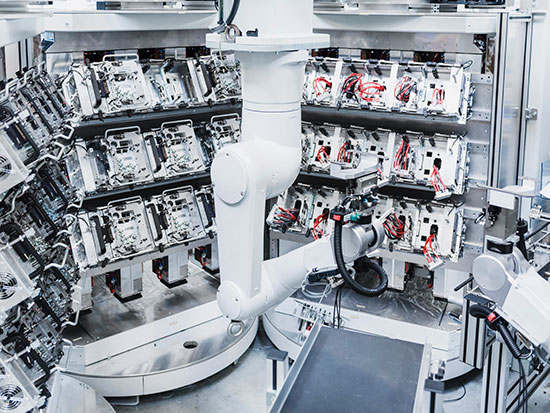 "When people lose their jobs, the jobs that tend to go first are the ones at the lower end of the totem pole. It’s easier to replace them if you need to hire them back later. And women and minorities tend to get stuck in the lower levels."Automation feels inevitable.

As you have probably heard, advances in machine learning, robotics and self-driving cars are threatening to put a vast number of people out of work in the coming decades. In 2017, the World Bank estimated that 57 percent of jobs could be automated within 20 years.

That is unsettling enough. But the cuts are not likely to affect all workers equally, warns UAB researcher Erin L. Borry, Ph.D. And that is a problem for humans to confront.

Borry’s study, “Automation in the Public Sector: Efficiency at the Expense of Equity?”, written with University of Kansas colleague Heather Getha-Taylor, Ph.D., is the first research to look into the equity effects of automation on the state and local government workforce. It was published in March in the journal Public Integrity.

“All organizations, public and private, are trying to do what they can to be efficient and save money,” said Borry, an assistant professor in the Department of Political Science and Public Administration in the UAB College of Arts and Sciences. “For the public sector, that means questions of how to do more with shrinking budgets.”

But unlike the private sector, where efficiency alone is often the major consideration, the public sector also holds a commitment to equity.

“And what we find is that the people likely to lose their jobs [to automation] are women and people of color, which goes against the stated goals of equal opportunity by the federal government,” Borry said.

Automation has already come for some state jobs. In one case cited in Borry’s paper, the state of Florida saved $8 million per year by replacing some of its human highway toll collectors with electronic toll gates. And in the Great Recession after the 2008 downturn, women and minorities felt a disproportionate share of the layoffs in state and local governments, research has shown.

Although women make up less than half of the state and local government workforce, they accounted for 70.5 percent of the roughly 765,000 jobs eliminated, according to a 2012 briefing paper by the Economic Policy Institute. Meanwhile, the number of African-Americans in state and local government employment fell 7.6 percent, the largest percentage change of any racial group.

To arrive at their estimates for job losses due to automation, Borry and Getha-Taylor started with a 2017 study by Carl Frey and Michael Osborne that listed the types of jobs — across both private and public sectors — that are most in danger of automation. Borry and Getha-Taylor then used data from the United States Equal Employment Opportunity Commission to examine the gender and racial characteristics of the employees who hold those types of jobs in state and local governments.

Equity and the “decision to automate”

Currently, 62 percent of the state and local government workforce is white, and 54 percent are men. But women and minorities are overrepresented in the occupations at highest risk of automation, Borry and Getha-Taylor found. For instance, women hold 72 percent of paraprofessionals jobs and nearly 85 percent of administrative support worker jobs. And although non-whites account for 35 percent of the workforce overall, they make up 49 percent of service maintenance workers and are overrepresented in paraprofessional and administrative support positions as well.

“If automation targets jobs that are already segregated by gender or race, it is also important to consider how the decision to automate may impact the public sector’s commitment to cultivating a diverse workforce and ensuring equal employment opportunity,” Borry and Getha-Taylor concluded in their paper. 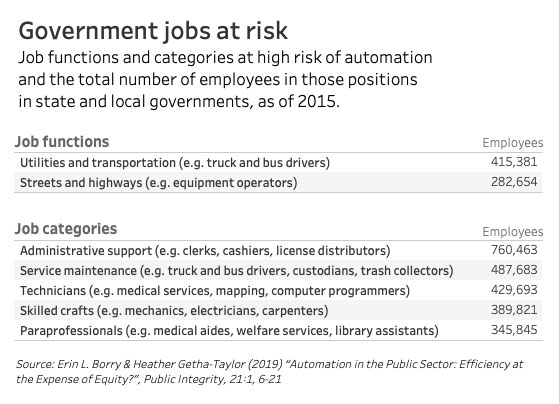 It is important to note that automation and job losses are not instantaneous, Borry notes. “But over time,” she said, “they could reduce full-time positions into part-time positions, or you may need only six people to do the work that seven or eight did in the past.”

Union membership rates among government workers are higher than in the private sector, although they have declined over recent years. “But it’s important to remember that unions work for the collective they represent; they’re not really looking at equity,” Borry said.

Also, the public sector occupations with the strongest unions, including police and teachers, are not as threatened by automation.

Who will make the calls?

Two organizational realities will affect the incursion of automation in government, Borry says.

The first is “the people hiring and firing and running state and local government departments don’t get to choose their budgets,” she said. “The politicians, city councils and state legislators do that. But personnel decisions are likely to be made by human resources departments in larger organizations or as the result of collective management decisions in smaller ones.”

The second is “when people lose their jobs, the jobs that tend to go first are the ones at the lower end of the totem pole,” Borry said. “It’s easier to replace them if you need to hire them back later. And women and minorities tend to get stuck in the lower levels.”

The Equal Employment Opportunity provisions apply to recruitment, hiring and promotions, Borry said: “We need to look at who we are letting go as well, to make sure that it’s not inadvertently discriminatory.”