by Adam Pope
This study has substantial conceptual and clinical implications for heart failure. 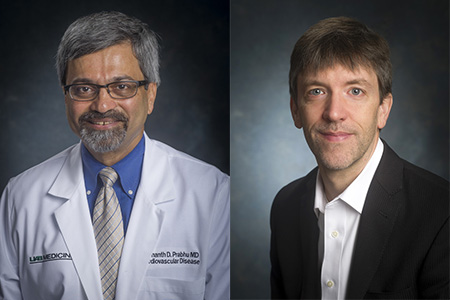 Sumanth Prabhu, M.D. and Martin Young, D.Phil. Researchers at the University of Alabama at Birmingham have been awarded a four-year, $2.3 million grant from the National Heart, Lung and Blood Institute to study macrophage circadian rhythms in heart failure.

According to Prabhu and Young, one of the key components in terms of discovery is that heart failure, a very common disease, is well recognized as a state of inappropriate inflammation.

“However, we don’t really know why there is so much persistence of inflammation,” Prabhu said, “and we have been unable, to date, to use anti-inflammatory therapies for therapeutic benefit for heart failure — clinical trials using different approaches have failed thus far.”

He added that their team is proposing a novel idea that disrupted circadian clocks in the macrophages themselves underlie the inflammation and subsequent progression of heart failure.

Prabhu and Young will have three specific aims during the four-year study:

“This represents a completely different way to immunomodulate the heart failure state,” Prabhu said. “So, the project has significant implications, both scientifically for our understanding of disease and for heart failure therapeutics that specifically target inflammation.”