by Bob Shepard
Researchers at UAB are looking at the health of brain structures called dendritic spines in the battle against Alzheimer’s disease. 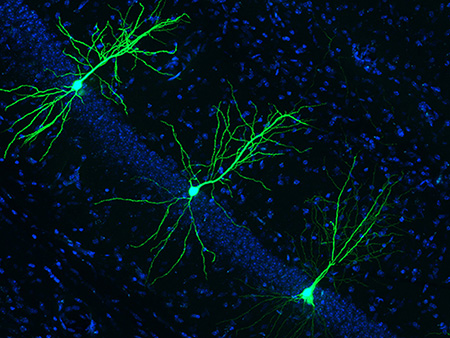 Inhibiting an enzyme called LIMK1 seems to improve the length and density of dendritic spines, shown here in green. Healthy dendritic spines are thought to have a protective effect against Alzheimer’s disease.Scientists at the University of Alabama at Birmingham have identified an enzyme in the brain that may be an intriguing target for interventions against Alzheimer’s disease and other dementias.

The researchers suggest that the enzyme, a serine/threonine kinase known as LIMK1, may play an important role in the degradation of dendritic spines, the connections between neurons in the brain. In a paper published June 25 in Science Signaling, the team reports on the use of an experimental medication that appears to successfully inhibit LIMK1 and provide a level of protection for dendritic spines.

“This is the first study to showcase that inhibiting LIMK1 could provide a protective effect for dendritic spines,” said Jeremy Herskowitz, Ph.D., assistant professor in the Department of Neurology, School of Medicine at UAB. “In animal models, we’ve shown that increased activity of LIMK1 is linked to changes in the length and density of dendritic spines, which has implications for Alzheimer’s.”

Think of dendritic spines as bridges connecting one neuron to another. Previous research in Herskowitz’s laboratory showed that individuals with longer and more numerous spines did not develop symptoms of dementia, even if they had the well-known Alzheimer’s pathology of amyloid plaques and tau tangles.

“In a healthy brain, LIMK1 appears to regulate the size and density of dendritic spines,” Herskowitz said. “In dementia, the enzyme is overactive, leading to damage to the spines. In this study, we were able to provide a protective effect to the dendritic spines by means of an experimental drug that inhibited activity of LIMK1.”

LIMK1 resides downstream of two other enzymes known to be associated with dementia. These Rho-associated kinases, known as ROCK 1 and ROCK 2, are increased in early Alzheimer’s disease, Herskowitz says. Investigators worldwide have looked to ROCK 1 and 2 as potential intervention targets in dementia.

“The ROCK kinases are proving to be challenging drug targets because inhibiting them may cause severe side effects — including a drop in blood pressure significant enough to cause death,” Herskowitz said. “But LIMK1, downstream in the signaling pathway, is regulated by the ROCK kinases, particularly ROCK 2. As far as we know now, inhibition of LIMK1 has no effect on ROCK, and so it may not carry the same severe side effects.” 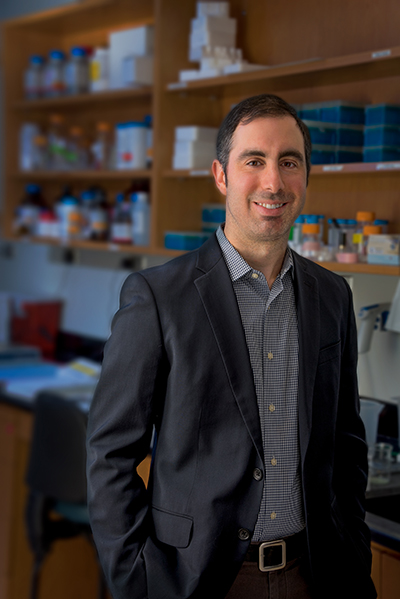 Jeremy Herskowitz, Ph.D., Department of NeurologyLIMK1 is also thought to play a role in cancer metastasis, so Herskowitz’s team turned to an experimental drug called SR7826, which is under development as a cancer therapeutic. SR7826 suppresses the activity of LIMK1. In an animal model, a single dose given once daily for 10 days boosted dendritic spine density and increased the length of the spines.

“The drug had remarkable effects on the dendritic spines, results that we feel are significant and promising,” Herskowitz said. “We observed no negative side effects.”

Herskowitz says further studies will be needed to see if the effect continues over time and if any negative effects develop.

“This is one of the first scientific papers to suggest that LIMK1 might be a better target for intervention than the Rock kinases,” he said. “Another important aspect of this sort of target is that it could lead to an intervention before loss of cognitive function has begun. It could provide a protective effect to prevent damage or loss of dendritic spines.”