by Jeff Hansen
This regenerative potential is lost within days after birth, which is why adult heart attacks lead to heart failure. 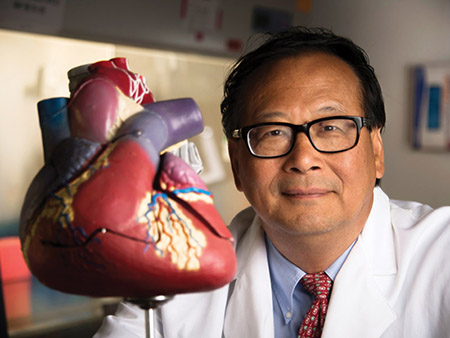 This regenerative potential is lost within days after birth, which is why adult heart attacks lead to heart failure.Unlike lower vertebrates, mammals are unable to repair their adult hearts after injuries that include heart attacks. This inability in humans leads to heart failure — a deadly and costly disease that affects more than 5 million Americans.

Biomedical investigators at the University of Alabama at Birmingham, and in Texas and New York, have now launched research to change that. They are probing a startling discovery seen in mice and pigs — the finding that those mammalian hearts do have the capacity to regenerate dead muscle tissue after a heart attack. There is a big catch, however — this remarkable ability is present for only a few days after birth.

With the support of a new $2.5 million grant from the National Institutes of Health, researchers will seek to understand why the newborn heart can repair itself, and how that regenerative capacity is lost. The study aims to decipher the mechanisms that govern the regenerative potential of large neonatal mammalian hearts, and then determine whether those regulatory mechanisms can be manipulated to remuscularize the heart after muscle death in the left ventricle, the heart’s major pumping chamber.

The research will be led by Jianyi “Jay” Zhang, M.D., Ph.D., chair and professor of the UAB Department of Biomedical Engineering; Hesham Sadek, M.D., associate professor of internal medicine, The University of Texas Southwestern Medical Center, Dallas; and Lior Zangi, Ph.D., assistant professor of cardiology at the Icahn School of Medicine at Mount Sinai, New York.

Zhang is a longtime leader in biomedical research to improve human heart attack recovery. He uses cells and cell patches made of heart muscle cells grown from induced pluripotent stem cells. Zhang says this grant is a new approach to heart repair made possible by Sadek’s discovery of neonatal heart regenerative ability in mice and Zhang’s showing the same ability in neonatal pigs. The larger pig hearts allow a study of the mechanisms of remuscularization of the injured heart in large mammals, which was not possible with the much smaller mouse hearts.

“This is an important grant because it is a new research direction to address one of the most significant problems in public health, and I am very happy to have the best people in the field working with us,” Zhang said.

Heart muscle cells in mammals exit the cell cycle and stop replicating several days after birth. Later growth of the heart comes from enlargement of existing cells, not from generation of new muscle cells. In adult heart attacks, heart failure follows because the heart is unable to regenerate new cardiomyocytes. Instead, the lost cardiomyocytes are replaced by fibrous tissue that causes a vicious circle of heart enlargement, decline in pumping function and, eventually, death.

In their research, Zhang, Sadek and Zangi will outline the duration of the window of cardiac regenerative potential in pigs and decipher the regulators that control why cardiomyocytes exit the cell cycle. Then they will see if they can modify those key regulators of the cardiomyocyte cycle to regrow heart muscle after a heart attack.

Anecdotal evidence for a regenerative ability in newborn human hearts includes a recent case report of a newborn patient whose heart regenerated almost completely from a heart attack that occurred shortly after birth.

“The many important clinical implications of work from this new grant could include the design of novel techniques for pediatric and adult heart disease interventions,” Zhang said. “Importantly, as we begin to better understand the mechanisms that regulate the drastic early postnatal decline in cardiomyocyte proliferation, we may be able to manipulate these mechanisms to promote myocardial regeneration in adult, as well as pediatric, patients.

“This is an important grant because this new research direction addresses the fundamental problem of heart failure — the loss of the contractile mass of the heart. If we can decipher the regulators that control why cardiomyocytes exit the cell cycle after birth, we will be able to turn back the clock and remuscularize the heart in patients suffering from heart attacks, thereby saving lives.”

The four-year grant from the National Heart, Lung and Blood Institute is HL149137.