by Alicia Rohan
People who spent their childhood or early adulthood in the Stroke Belt are more likely to develop cognitive impairment later, even if they have moved away. 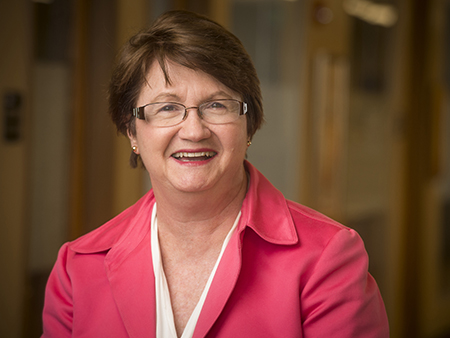 Virginia Howard, Ph.D.People who spent all of their childhood and early adulthood in the Stroke Belt are more likely to develop cognitive impairment later in life compared to those who did not, according to a new study led by researchers at the School of Public Health at the University of Alabama at Birmingham.

The study, which was presented at the American Stroke Association’s International Stroke Conference, found that those who live in the Stroke Belt — which includes Alabama, Arkansas, Georgia, Louisiana, Mississippi, North Carolina, South Carolina and Tennessee — when they are middle-aged and older, but lived somewhere else as a child or young adult, are not as likely to develop cognitive impairment.

Researchers compared nearly 11,500 people living in the Stroke Belt with nearly 9,000 people living outside of it. All of the participants are part of the Reasons for Geographic and Racial Differences in Stroke, or REGARDS, study, a federally funded study based at UAB.

“Risk factors for both stroke and cognitive decline, such as smoking and high blood pressure, may be more common in the Stroke Belt than elsewhere in the country — even in children and young adults,” Howard explained.

“These findings suggest that early residence in the Stroke Belt during childhood or early adulthood may increase the risk of cognitive impairment, no matter where you live in later adulthood,” Howard explained. “As other research studies are also finding, this study suggests that attention should be paid to managing risk factors earlier in life, toward prevention of cognitive decline.”

Researchers also found that there was no difference in risk of cognitive impairment in those who spent all or part of their childhood, or some but not all of their young adulthood, within the Stroke Belt.