by Savannah Koplon
Researchers from UAB are working with the NIH and Bill & Melinda Gates Foundation to study a potential antibiotic to treat maternal and infant sepsis in low-income countries. 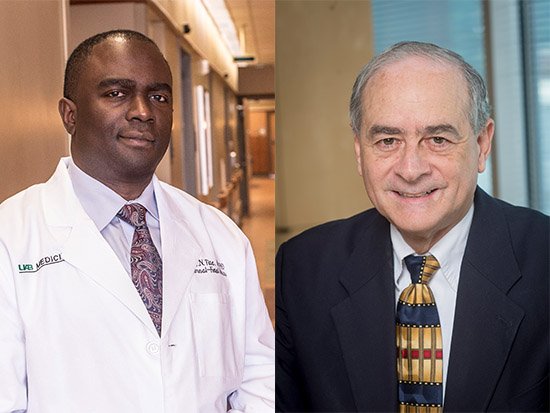 Alan Tita, M.D., Ph.D., and Wally Carlo, M.D.Researchers from the University of Alabama at Birmingham School of Medicine — with support from the National Institutes of Health and the Bill & Melinda Gates Foundation — will conduct a clinical trial to assess whether a single oral dose of the antibiotic azithromycin during labor reduces the risk of maternal and infant bacterial infection and death in seven low- and middle-income countries.

According to the World Health Organization, infections like sepsis during pregnancy and in the weeks after birth account for roughly 10 percent of maternal deaths and 16 percent of newborn deaths worldwide. The clinical trial — A-PLUS, a randomized, placebo-controlled, parallel multicenter trial — will help researchers test a low-cost intervention that has already shown promise in preventing death in smaller studies.

“The A-PLUS trial will be a pivotal study as it will conclusively determine whether a single intra-partum oral dose of azithromycin reduces death or infection in mothers and their newborn babies in low-resource settings,” said Wally Carlo, M.D., division director of Neonatology in the Department of Pediatrics at UAB and co-principal investigator of the trial.

Many women in low-income countries are at risk due to factors including delayed diagnosis, lack of access to medication and chronic malnourishment, among other factors. Currently, there are no effective antibiotic strategies that prevent a majority of these infections and related deaths.

“This is an extension of prior UAB-led NICHD-funded studies demonstrating that adjunctive azithromycin cost-effectively prevents infection after cesarean delivery,” explained Alan Tita, M.D., Ph.D., director of the UAB Center for Women’s Reproductive Health, professor in the Department of Obstetrics and Gynecology, and co-principal investigator of the trial. “In a sub-study, we will evaluate the effects on antimicrobial resistance and the microbiome in participants and their babies.”

Investigators plan to enroll up to 34,000 women at NICHD Global Network sites in Bangladesh, the Democratic Republic of the Congo, Guatemala, India, Kenya, Pakistan and Zambia. Half of the women will receive a single 2-gram dose of oral azithromycin, and the other half will receive a placebo, while being monitored for infection and signs of fever during their hospital stay and up to six weeks post-delivery.