by Yvonne Taunton
Researchers at UAB continue leading the way in finding the best personal protective equipment for use. 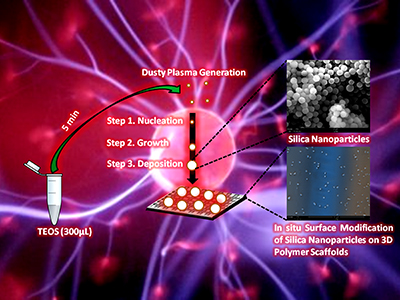 Researchers at UAB continue leading the way in finding the best personal protective equipment for use. An interdisciplinary team of researchers at the University of Alabama at Birmingham has developed a new method of surface engineering polymer soft materials that has potential to accelerate bio-integration, while potentially contributing to other scientific uses, such as decontaminating personnel protective equipment.

The team, led by Vinoy Thomas, Ph.D., in the School of Engineering’s Department of Materials Science and Engineering, published their findings in American Chemical Society’s journal, ACS Applied Nano Materials.

The proof of concept contained in the article reports a rapid and easy method for the synthesis of silica nanoparticles — SiNps — from a liquid precursor into dusty plasma before being deposited as nanoparticles onto a 3D-printed polymer. “Specifically, a plasma-enhanced chemical vapor deposition of a very small amount of a liquid precursor, tetraethoxysilane, for a very short exposure time resulted in the generation of dusty plasma of SiNps with a narrow size distribution,” the authors state in the article abstract.

“Non-thermal plasma has emerged as a viable method for surface engineering soft materials and biomaterials,” said Vineeth Vijayan, Ph.D., the first author of the publication, “and we have successfully utilized non-thermal plasma for making super-hydrophilic and blood-friendly material’s surfaces in our previous publication in Journal of Materials Chemistry B.”

The process described in the paper has advantages over existing methods, in that it is a single-step, greener and more cost-effective process. In addition, the radiofrequency plasma reactor can be an ideal scalable technology that industries can use to produce and modify the surface of various biomedical scaffolds or devices with SiNps. This method can also sterilize the 3D-printed PLA polymer scaffolds with SiNps while simultaneously modifying them for biomedical applications such as bone-tissue engineering.

This work was funded by a grant from the National Science Foundation’s EPSCoR Track 1 program, CPU2AL, and it involved collaboration from nine universities in the state of Alabama.

Next steps for Thomas’ research team will deal with the “functionalization and attachment of SiNps with biochemical moieties by using volatile amino acids in the plasma phase,” as well as “devising strategies for preparing titanium dioxide nanoparticles and nanowires via the plasma process.”

Personal protective equipment and disinfected surfaces are crucial to stopping the spread of coronavirus and other diseases,” Thomas said. “This method might be utilized for plasma synthesizing with titanium dioxide nanoparticles toward surface-engineering PPE such as masks or filters for making their surface virucidal by photo-catalysis.” Thomas says he foresees the application of plasma methods as potentially inactivating or decontaminating the surfaces of used masks for reuse.