by Savannah Koplon
UAB researchers led a large multiple-country study and used advanced machine learning techniques for risk prediction of neonatal deaths. The study reveals that low weight among newborn infants is associated strongly to most deaths in underdeveloped settings and suggests how these deaths can be reduced. 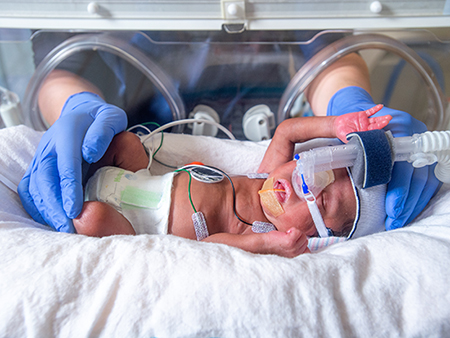 UAB researchers led a large multiple-country study and used advanced machine learning techniques for risk prediction of neonatal deaths. The study reveals that low weight among newborn infants is associated strongly to most deaths in underdeveloped settings and suggests how these deaths can be reduced.Resource-limited settings are the chief cause of overwhelming neonatal and fetal deaths around the world, with low- and middle-income countries such as India and Pakistan continuing to be major contributors to neonatal mortality.

In a cohort study published by the Journal of the American Medical Association, researchers from the University of Alabama at Birmingham and the NICHD Global Network for Women’s and Children’s Health Research outline how the integration of fetal and neonatal risk assessment tools, including predictive factors like birth weight, can identify pregnancies and newborns at high risk for stillbirth and neonatal mortality on a global scale.

By using advanced machine learning techniques, the researchers were able to derive risk prediction models with high accuracy. The models identified in the current study will be very useful for point of care risk identification and can help in early identification and optimal treatment of at-risk neonates. The study was conducted in India, Pakistan, the Democratic Republic of Congo, Kenya, Zambia and Guatemala.

“Birth weight was by far the most predictive variable for neonatal death and can be used to identify at-risk infants,” said Wally Carlo, M.D., professor of pediatrics in UAB’s Division of Neonatology and senior author of the article. “Many babies in low-resource settings die during the first days after birth in large part because they are very small, and better estimates of birth weight before birth could be used to identify women who may benefit from referral to a higher level of care hospital.”

High-resource countries like the United States use approximated gestational age — measured in weeks from the first day of the last menstrual period — for the identification of women who should be referred to hospitals that specialize in care for premature babies. However, pre-determination of gestational age may not be readily available in low-income countries due to resource constraints, which is a contributor to why it is challenging for physicians in these areas to be able to monitor mother and baby accurately.

“In such low-resource settings, estimates of birth weight before birth and birth weight measured right after birth could be used to try to reduce deaths of small babies,” Carlo said.

The article’s findings indicate that such predictive data, when applied, had good predictive accuracy for risk of neonatal mortality. However, the authors explain that future strategies need to be developed to identify at-risk mothers and babies and implement care needed at that time.