by Adam Pope
A study conducted by UAB investigators found that the newly recommended scores are very effective in diagnosing a type of heart failure that is challenging to detect, and can also help predict patients’ long-term outcomes. 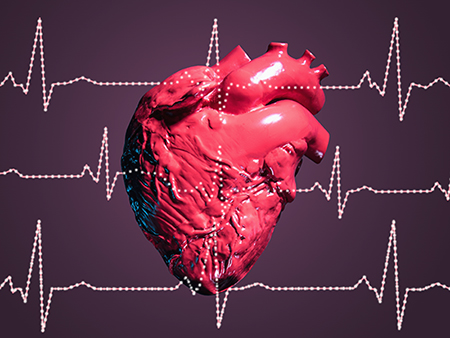 Vibhu Parcha, M.D., a clinical research fellow in UAB’s Division of Cardiovascular Disease and the first author of this study, explained that HFpEF is like a syndrome with patients having numerous coexisting medical conditions that contribute to the worsening of the heart.

“We commonly understand heart failure as a condition when the heart is unable to pump out as much blood as it is receiving,” Parcha said. “It is more challenging to diagnose HFpEF because the problem lies with the filling of the heart with blood instead of its output. The condition is often not correctly diagnosed among patients coming to hospitals or clinics with unexplained shortness of breath that is caused by worsening of the HFpEF.”

Parcha and his investigative team analyzed data from the participants of prior HFpEF clinical trials and the Atherosclerosis Risk in Communities Study participants with shortness of breath not explained with usual causes. The investigators applied the scores in these patients to see whether the scores were able to accurately rule out or rule in HFpEF using the two scores.

Parcha also noted that the H2FPEF score was reflective of the underlying functional or exercise capacity of HFpEF patients. This is important since the determination of the functional capacity in these patients with multiple comorbidities is quite challenging and yet important to understand the disease progression.

“In the field of medicine, the tackling of HFpEF burden in the United States is a major challenge, which starts with first accurately diagnosing the disease,” said senior author Pankaj Arora, M.D., a physician-scientist in the UAB Division of Cardiovascular Disease. “The two newly developed scores are simple and easy to use at the bedside and in emergency rooms without any requirements for invasive and more complex measures.”

Arora added that this study shows that researchers now have two validated, robust and easy-to-use methods to identify the patients with HFpEF early in the disease.

“The scores can be used easily in nearly all of the clinic rooms across the nation,” Arora said. “This will allow us to manage the HFpEF patients more closely by diagnosing them early and contributing to improve their lives. As a community, we lack a gold standard and easy-to-use approach for diagnosing HFpEF. The wider adoption of these robust diagnostic scores will help in mitigating the large HFpEF disease burden in the United States. With the recent approval of medications for HFpEF by FDA, we now have a growing arsenal to battle this commonly missed disease.”