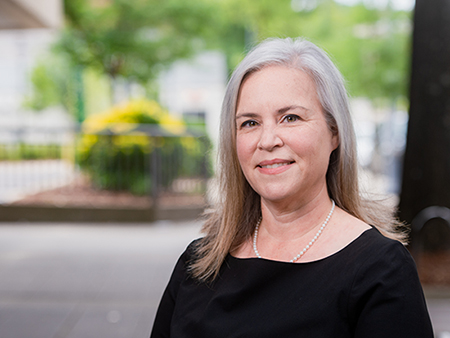 Kelley Pettee Gabriel, Ph.D.
(Photo by: Lexi Coon)Kelley Pettee Gabriel, Ph.D., an epidemiologist at the University of Alabama at Birmingham, will present preliminary findings on the consequences of sedentary lifestyles at the American Heart Association’s Epidemiology, Prevention, Lifestyle & Cardiometabolic Health Conference 2021. Gabriel is lead author on one of three studies that examines the effects of moderate to high television viewing on cognitive and brain health decline.

“While studies have shown the benefits of exercise to support brain health, less is known about the potential consequences of prolonged sedentary behavior such as television viewing on brain structure and function,” Gabriel, a professor in the School of Public Health, said. “Engaging in healthy behaviors during midlife — between ages 45 and 64 years in the context of our study — may be important factors to support a healthy brain later in life.”

To better understand the effects of sedentary behavior during midlife on brain health, Gabriel led teams with Priya Palta, Ph.D., MHS, assistant professor of medical sciences and epidemiology at Columbia University Vagelos College of Physicians and Surgeons in New York City. The teams examined television viewing information collected from a subset of participants from the Atherosclerosis Risk in Communities Study and the ARIC Neurocognitive Study. Participants were asked how much they watched television during their leisure time. Palta’s study focused on cognitive decline and risk of dementia, while Gabriel’s study focused on structural brain markers from brain imaging scans.

Gabriel’s study, “MP24 - Sedentary Behavior In Mid-life And Structural Brain Magnetic Resonance Imaging Markers Of Cerebrovascular Disease And Neurodegeneration In Late-life: The Atherosclerosis Risk In Communities Neurocognitive Study ARIC/NCS,” included 1,601 adults. Participants self-reported the amount of television viewing during the first and third of five visits. They then underwent a magnetic resonance imaging scan of the brain at the fifth visit.

Scans were reviewed for structural brain markers, including deep gray matter. Gray matter is involved in muscle control, seeing and hearing, decision-making, and other important brain functions. The higher a person’s volume of brain gray matter, the better cognitive skills they typically have.

In this study, researchers found:

Ryan Dougherty, M.S., Ph.D., a postdoctoral fellow in the Department of Epidemiology at the Johns Hopkins Bloomberg School of Public Health in Baltimore, Maryland, was the lead author in the third study. His study found a correlation between television viewing and the volume of gray matter in the brain.

The three researchers agreed there is a need to identify modifiable behaviors, such as excessive television viewing, that may be targeted prior to the development of cognitive impairment. Promoting healthy brain aging is important, particularly given current trends in television viewing and binge-watching behaviors.

Limitations of these studies are that television viewing was based on participant reporting, which may not be accurate. Television viewing is only one type of sedentary behavior and provides an incomplete picture of total sedentary time.

In addition to presenting her preliminary findings, Gabriel will be recognized as a recipient of the Steven N. Blair Award for Excellence in Physical Activity Research at AHA’s virtual meeting May 20-21.

The research was funded by the National Institutes of Health Atherosclerosis Risk in Communities Study and ARIC Neurocognitive Study. For more information on the studies, click here.