A UAB researcher has found a potential new way to treat head and neck cancer.

Shih-Hsin (Eddy) Yang, M.D., Ph.D., an assistant professor in the UAB Department of Radiation Oncology and associate scientist in the experimental therapeutics program at the UAB Comprehensive Cancer Center, found a way to prevent head and neck cancer cells from repairing damage to DNA as they grow. 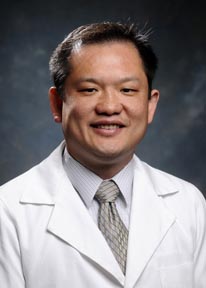 The findings, published by the Public Library of Science, showed that using the drug cetuximab can induce a DNA repair defect in head and neck cancer cells, and subsequently render the tumors susceptible to PARP inhibitors, which block enzymes that repair some types of DNA damage. This method prevents cancer cells from repairing the damage to the DNA as they grow, ultimately leading to cancer inhibition.

Poly ADP-ribose polymerases, or PARPs, are enzymes that repair some types of damage done to DNA. If they are inhibited, a backup repair pathway is initiated. Cetuximab, which inhibits the epidermal growth factor receptor signaling pathway of cancer cells, blocks this backup pathway and thus induces cancer cell death.

“The novelty of this finding is that we use targeted agents like cetuximab, in combination with a PARP inhibitor, ABT-888, both of which have already been tested to be safe in humans, to selectively kill tumors defective in DNA repair while potentially minimizing side effects,” says Yang.

Cetuximab was pioneered by James Bonner, M.D., chair of the UAB Department of Radiation Oncology, in a landmark multi-institutional clinical trial in head and neck cancer patients.

Because head and neck cancers are frequently aggressive, outcomes for patients are currently poor.