by Jim Bakken
The Office of National AIDS Policy chose UAB as a site to monitor implementation of the National HIV/AIDS Strategy.

The University of Alabama at Birmingham was the first of five locations chosen for implementation dialogues coordinated by the White House Office of National AIDS Policy (ONAP) to achieve major objectives outlined in the National HIV/AIDS Strategy (NHAS).

“We know that the South is disproportionately affected by HIV, and UAB is probably the premiere research institution in the South,” says Jeffrey Crowley, M.P.H., director of ONAP, explaining the reason Birmingham was selected for the Sept. 27, 2011, meeting on integrating prevention and care research.

“We will spend more than $20 million in federal funds responding to the domestic HIV epidemic,” says Crowley. “We need to continue our efforts, but we also need people at the state and local levels to help. UAB has prominent HIV clinicians with whom we have worked extensively, and we wanted to engage them.”

One of those researchers is Michael Saag, M.D., UAB professor of medicine and director of the UAB Center for AIDS Research. Saag, who moderated the event, has been publishing research in the field of HIV since the 1980s. His notable findings include seminal discoveries in the genetic evolution of HIV in vivo (Nature, 1988).

“The objectives of research in HIV have changed dramatically during the past decade. Before now, our focus was on developing new drugs and finding ways to get the virus under control — we’ve done that,” says Saag. “During the next five to 10 years we need to implement care, we need to develop vaccines and we also would love to have a cure.”

The NHAS has three main goals: reducing new HIV infections, increasing access to care and improving health outcomes for people living with HIV, and reducing HIV-related health disparities. Saag says various barriers will have to be overcome to accomplish these objectives by 2015.

“We have to find the people who are infected, get them into care and get them to stay in care. Doing so will help us improve outcomes,” Saag says. “I think we can achieve the goals by 2015 — and that’s what we’re going to try real hard to do.” 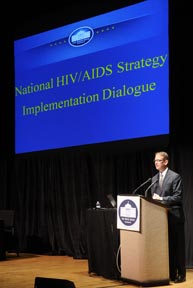 Several patients of the 1917 Clinic, a comprehensive HIV/AIDS clinic opened by Saag in 1988, attended the White House event, and one in particular was very happy with what he heard.

“I think it was more than successful. I think it set the stage for things to come,” says Cornell Ellis, a Birmingham resident who has been living with AIDS for 21 years. “HIV/AIDS is such a complex matter, and they covered a great deal of material from many angles. The level of participation was particularly impressive — from the top down.”

Crowley toured the 1917 Clinic during his visit.

“Having someone of Mr. Crowley’s stature visit the clinic acknowledges the hard work and caring that has taken place here during past 23 years,” says Director James Raper, D.S.N., C.R.N.P. It signifies that we have one of the most comprehensive HIV clinics available today in the United States.”

Other presenters at the event included researcher Michael J. Mugavero, M.D., associate professor in the UAB Division of Infectious Diseases, and Howard K. Koh, M.D., assistant secretary for health in the U.S. Department of Health and Human Services. Representatives of various national health entities also participated in a panel discussion.

For more information or to register to attend a meeting, visit www.whitehouse.gov/blog/2011/09/13/latest-update-registering-nhas-implementation-dialogues.