Newly discovered details might advance efforts to reverse Rett syndrome, a rare condition that prevents an infant’s brain circuitry from developing, according to a presentation called out as a “Hot Topic” by the Society for Neuroscience at its annual meeting this week. 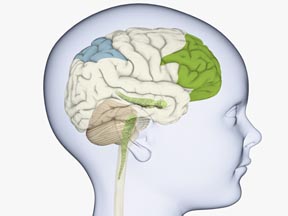 The study by researchers at the University of Alabama at Birmingham is part of mounting evidence that conditions from autism to Down syndrome need not last a lifetime.

“Our results suggest that the field is on the right track in early efforts to design a treatment for a devastating condition in Rett syndrome,” said Lucas Pozzo-Miller, Ph.D., professor of neurobiology at UAB and senior author of the paper. “They also provide the latest argument that correcting for the genetic miscues behind developmental disabilities may one day reverse their effect, even if treated in adulthood.”

Past studies found that mutations or changes in a single gene, MECP2, are present in 95 percent of children with Rett syndrome, called RTT, which affects one in 15,000 children. Located on the X sex chromosome, the mutated gene has different effects in boys and girls. Boys suffer severe malformation and rarely survive. Girls appear normal for a few months after birth, but then their motor skills and cognitive ability regress and they may have seizures.

Previous work in Pozzo-Miller’s lab established that the nerve cells in RTT children have fewer dendritic spines, structures that branch from nerve cells to better pick up signals in the gaps, or synapses, between them. The spines can be counted as a measure of the ability of nerve cells in the hippocampus, which directs learning and memory, to relay and store information as circumstances change.

The work proceeds from the revolutionary idea that experience changes the physical wiring of nerve cells. Cells become more closely wired to neighbors in the nerve pathways most often used, but dwindle when idled. Evidence also suggests that developing brains build the capacity to think and remember by changing connection strength between neurons, with the change reflected in dendritic spine density.

To understand the role of MECP2 malfunction in reducing the number of dendritic spines, the team analyzed its density in mice engineered to lack the MECP2 gene.

They found, as expected, that mutant mice too young to have symptoms yet had a lower dendritic spine density in hippocampal neurons than their normal counterparts.

Unexpectedly though, the team also found that when mice lacking MECP2 grew old enough to become symptomatic, the mice had about the same number of spines on their dendrites as wild type mice. The finding seemed to call into question the validity of dendritic spine density as a measure for lost plasticity-related function in Rett syndrome.

A closer look, however, revealed that dendritic spines in symptomatic mutant mice, while as numerous as those in control mice, were “frozen.”  They no longer changed in size, number or shape over time depending on how much the nerve pathway was stimulated by known triggers like the neurotransmitter glutamate.

“Perhaps the system tries to compensate for the lack of MECP2 function by increasing the number of spines formed through abnormal channels,” Pozzo-Miller said. “This dense, frozen wiring might explain why children with RTT lose cognitive ability and why they have seizures as sensitive but faulty nerve connections overload. Further study will tell.”

The paper, titled “Hippocampal CA1 pyramidal neurons show impaired dendritic spine density and morphology only in presymptomatic Mecp2 mutant mice,” was presented Monday, Nov. 14, at the 2011 annual meeting of the Society for Neuroscience in Washington, D.C.  Also making an important contribution was Gaston Calfa, Ph.D., a post-doctoral fellow within UAB Department of Neurobiology.  The work was funded by National Institute of Neurological Disorders and Stroke and the International Rett Syndrome Foundation.

“The result further validates dendritic spine density as a useful measure for the loss of plasticity in developmental disability, and potentially, of the ability of experimental treatments to restore it,” said Christopher Chapleau, Ph.D., a post-doctoral fellow in UAB’s Department of Neurobiology and first author on the paper. “Having a good model is particularly important right now because the field has identified a protein, BDNF, which drives dendritic spines to grow, and that might reverse the loss seen in Rett syndrome."