UAB team rewarded for helping stop social media botnet and others; Facebook donates $250,000 of money recovered from spammers to CIA|JFR 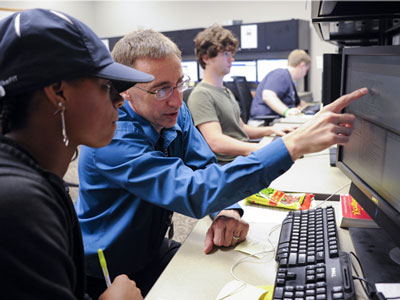 The Center for Information Assurance and Joint Forensics Research at the University of Alabama at Birmingham has received a $250,000 donation from Facebook in recognition of the center’s role in tracking international criminals behind social-media botnet Koobface as well as other spammers. The donation, which comes from money Facebook has recovered from spammers located around the world, will be used to expand the new CIA|JFR headquarters.

“As a result of numerous collaborations over the years, Facebook recognizes the center as both a partner in fighting Internet abuse, and as a critical player in developing future experts who will become dedicated cybersecurity professionals,” says Joe Sullivan, chief security officer at Facebook. “The center has earned this gift for their successes in fighting cybercrime and because of the need for formal cybersecurity education to better secure everyone’s data across the world.”

(Learn more about how UAB students solve real-world crimes from the classroom.)

October is National Cyber Security Awareness Month in the United States. But inside the center, a multidisciplinary research hub, the awareness of scary cyberattacks does not end the day after Halloween. The center, which gathers resources from law enforcement, business, government agencies and academia, gathers more than 1 million spam emails daily in its UAB Spam Data Mine. Center researchers understand that cybercriminals from Eastern Europe and Asia are working relentlessly to find new weaknesses, every day of the year.

“Cyberattacks are ever-evolving and multiplying and the well-being of society depends on a highly trained workforce, so we thank Facebook for helping bolster the center as we continue to educate the next generation of cybercrime solvers,” says Anthony Skjellum, Ph.D., chair of the UAB Department of Computer and Information Sciences and co-founder of the CIA|JFR. “The Facebook Suite will be the CIA|JFR nerve center. It will be the place where cybervisionaries from around the world will gather to share ideas, discoveries and solutions.”

On Jan. 17, 2012, Facebook Security posted a message about their fight to stop Koobface, noting that it took more than three years “of working closely with industry leaders, the security community, and law enforcement” to end the threat from the virus and the criminals behind it.

The Facebook team ended the piece by personally thanking only four people, two of whom were at UAB: Brian Tanner, then a student and today the first UAB student to earn a master’s degree in Computer Forensics and Security Management; and Gary Warner, director of Research in Computer Forensics. (Read the entire Facebook post here.)

Richard Marchase, Ph.D., interim UAB president, originally backed the creation of the CIA|JFR in his role as the university’s Vice President of Research and Economic Development. He says it was an easy decision that pays off every day.

“Cyberattacks are generally perpetrated by sophisticated networks, so we all realized that any successful effort to combat them would likewise require a specialized network that could compete with anything operating in the underworld,” says Marchase. “The center has already assembled an internationally respected team, and now Facebook’s generous contribution will help provide us with a state-of-the-art headquarters, positioning UAB at the vanguard of the global fight against cybercrime.”

Alabama Attorney General Luther Strange says he is proud that the state is home to this valuable law enforcement tool. “I commend UAB’s Center for Information Assurance and Joint Forensics Research along with its students and faculty for their efforts in fighting the war against cybercrime,” says Strange. “UAB is to be applauded for its efforts to train students in this field. I also want to thank Facebook for its generous donation and ongoing efforts in the cybersecurity arena.”

The new CIA|JFR headquarters will be located on top of the University Boulevard Office Building on UAB’s campus. The Facebook Suite is scheduled to open and make its debut at the second annual Cyber Summit on Feb. 12, 2013.

The FBI recently thanked UAB for helping solve an attack that infected more than 400 million computers in 100-plus countries. Read more.