The award is presented annually to an academic psychiatrist who has fostered the pursuit of trainee research within his university department. 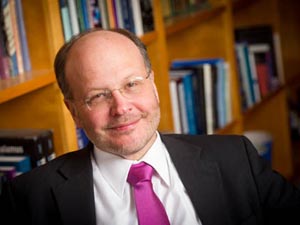 James Meador-Woodruff, M.D., Heman E. Drummond professor and chair of the Department of Psychiatry and Behavioral Neurobiology in the University of Alabama at Birmingham (UAB) School of Medicine, has been named the recipient of the 2013 Research Mentorship Award of the American Psychiatric Association (APA).

The award is presented annually to an academic psychiatrist who has, in a significant traditional or innovative manner, fostered the pursuit of trainee research within his or her university department.

Meador-Woodruff was previously awarded the 2007 Kempf Fund Award for research development in psychobiological psychiatry from the American Psychiatric Institute for Research and Education (APIRE). The award recognizes a senior researcher who has made a significant contribution to research on the causes and treatment of schizophrenia as both a researcher and a mentor.

The Kempf Fund Award provided funding to support the development of the research career of Robert McCullumsmith, M.D., Ph.D., while he was working in a mentor-trainee relationship with Meador-Woodruff. McCullumsmith joined the UAB faculty along with his mentor from the University of Michigan in 2006.