Could the Southern diet pattern raise your risk of stroke?

Diet is one of many potential factors proposed to explain racial and regional differences in stroke. 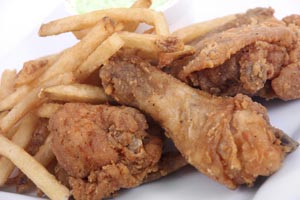 Suzanne Judd, Ph.D., assistant professor in the University of Alabama at Birmingham (UAB) Department of Biostatistics, recently presented her findings on a possible linkage between eating Southern-style foods and a higher risk of stroke at the American Stroke Association 2013 International Stroke Conference. Judd described Southern-style eating as a fairly high fat diet, including a lot of fried foods, processed meats, foods with a high sodium content, and sweet tea, consumed up to six days per week.

Diet is one of many potential factors proposed to explain racial and regional differences in stroke. Prior research has shown that blacks are at a higher risk of stroke, and there is higher stroke mortality in the southeastern portion of the United States. Judd and her team examined the association of diet patterns with risk of stroke in the REGARDS study.

“People who ate Southern food had a 30 percent increased risk of stroke,” Judd explained. “This was common whether they were black, white, male or female, and it did not matter where they lived, in the South or not.”

Judd reported that Southern cuisine wasn’t all bad — her team also found that greens such as collards were a staple in the diets of many who adhered to this style of eating.