Palmer Station, the only U.S. research station on the Antarctic Peninsula, can now claim the Antarctic Peninsula’s first live penguin cam thanks to a partnership between the University of Alabama at Birmingham (UAB), Abercrombie & Kent Philanthropy (A&K Philanthropy), the National Science Foundation (NSF) Long Term Ecological Research (LTER) program and a generous donation from the makers of Oreo cookies. The camera will allow scientists and students who may never visit Antarctica the opportunity to witness climate change impacts firsthand. 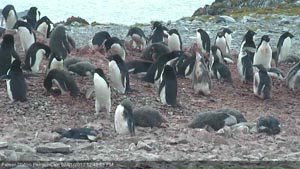 The camera is aimed at an Adelie penguin rookery, where the penguin population has declined an estimated 80 percent since the 1970s.  Scientists attribute the decline to factors related to climate change, including the loss of annual sea ice and unseasonable snow storms that bury the colony and drown the eggs in snow melt.

James McClintock, Ph.D., UAB endowed professor of Polar and Marine Biology, helped develop the concept for a penguin cam while visiting Palmer Station on one of his annual UAB Antarctica Cruises. He has made 20 trips to Antarctica in his three decades of research, and on each trip he wished there was a better way to allow everyone to experience the White Continent.

The camera, mounted to a heavy duty tripod secured to the ground, is able to withstand temperatures below freezing and severe winds on the continent that is known as the windiest on Earth. The penguin cam is located near the Adelie nesting area and can be remotely manipulated by computer to better view the penguins.

“The Adelie penguins’ breeding, egg-laying and chick-rearing season occurs during the school year. Next year Palmer Station will reserve time for classrooms, and open their bandwidth so students can watch penguins in Antarctica live and uninterrupted for 30 minutes at a time,” said McClintock, author of “Lost Antarctica: Adventures in a Disappearing Land.”

Recent gifts presented to Palmer Station scientists by McClintock and A&K Philanthropy include a light-sensing instrument mounted to a remotely operated submersible that measures chlorophyll, as well as a state-of-the-art computerized camera that is mounted on a microscope used to study plankton. This year, they will help purchase an echolocation instrument that, when mounted to the side of a rubber zodiac boat, will aid scientists in locating and measuring swarms of krill, the shrimp-like animals that form the base of the Antarctic food web.

“The Antarctic Peninsula is among the very first regions on our planet to feel the effects of climate change,” said Jorie Butler Kent, A&K vice chairman. “For the past five years, we have supported research to understand the impact of these changes by delivering equipment that brings climate change science and other marine and terrestrial studies directly from Palmer Station to scientists and students around the world.”

McClintock, who has published more than 225 scientific papers, takes UAB undergraduates who have enrolled in his three-credit Antarctic Marine Ecology course on the cruise.  Students work on field projects and compile a detailed natural history notebook that describes the distribution and ecology of a suite of the marine animals they encounter during their Antarctic voyage.

McClintock envisions that the penguin cam will provide a valuable educational tool for current and future scientists. In addition to bringing a few students to Antarctica, McClintock will bring Antarctica to thousands of students.

“Thanks to the zoom lens, children from around the world will get a closer look at Adelie penguins than even the people we take on our tour,” said McClintock. “Plus, we anticipate that next year teachers and their students will be able to control the penguin cam using the keyboard of their classroom computer, so they get a hands-on taste of Antarctica without leaving the classroom.”

McClintock’s hope is to build a curriculum package around the live Adelie penguin experience. Curricula would be developed for different age groups of students, emphasizing not only the ecology and life history of the Adelie penguin, but also how rapid climate change is causing dramatic shifts along the Antarctic Peninsula that are resulting in the disappearance of this iconic species.

The penguin cam is live and open for anybody to see here. Bandwidth limitations in Antarctica mean the public will see a frozen picture of the rookery that is refreshed every 60 seconds. The cam is also featured as one of the United States Antarctic Program (USAP) webcams located  at this website.

McClintock recommends that people visit the cam right away because the penguins are at the very end of their chick rearing season, and they will depart in mid- to late-February. The good news is that the penguins will return in October to begin their annual five-month breeding, egg-laying and chick-rearing season.

The 2013 UAB Antarctic Cruise is scheduled to depart Ushuaia, Argentina, Dec. 11 and return Dec. 22. To join McClintock, a world-recognized Antarctic expert, for a personalized tour of the White Continent, contact Jane Hazelrig at 205-874-8522 or hazelrig@allseasonstravel.com for details. Discounted cabins are available until Feb 28, 2013.