UAB research says 2,000 pound turtle could be extinct within 20 years

An international team led by the University of Alabama at Birmingham (UAB) has documented a 78 percent decline in the number of nests of the critically endangered leatherback sea turtle (Dermochelys coriacea) at the turtle’s last stronghold in the Pacific Ocean. 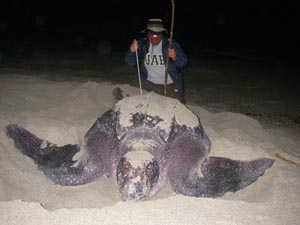 The study, published online today in the Ecological Society of America’s scientific online journal Ecosphere, reveals leatherback nests at Jamursba Medi Beach in Papua Barat, Indonesia – which accounts for 75 percent of the total leatherback nesting in the western Pacific – have fallen from a peak of 14,455 in 1984 to a low of 1,532 in 2011. Less than 500 leatherbacks now nest at this site annually.

Thane Wibbels, Ph.D., a professor of reproductive biology at UAB and member of a research team that includes scientists from State University of Papua (UNIPA), the National Oceanic and Atmospheric Administration (NOAA), National Marine Fisheries Service and the World Wildlife Fund (WWF) Indonesia, says the largest marine turtle in the world could soon vanish.

“If the decline continues, within 20 years it will be difficult if not impossible for the leatherback to avoid extinction,” said Wibbels, who has studied marine turtles since 1980. “That means the number of turtles would be so low that the species could not make a comeback.

“The leatherback is one of the most intriguing animals in nature, and we are watching it head towards extinction in front of our eyes,” added Wibbels. 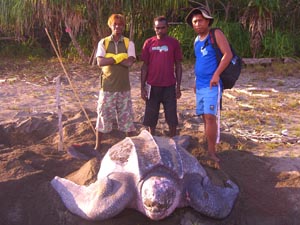 Leatherback turtles can grow to six feet long and weigh as much as 2,000 pounds. They are able to dive to depths of nearly 4,000 feet and can make trans-Pacific migrations from Indonesia to the U.S. Pacific coast and back again.

While it is hard to imagine that a turtle so large and so durable can be on the verge of extinction, Ricardo Tapilatu, the research team’s lead scientist who is a Ph.D. student and Fulbright Scholar in the UAB Department of Biology, points to the leatherback’s trans-Pacific migration, where they face the prevalent danger of being caught and killed in fisheries.

“They can migrate more than 7,000 miles and travel through the territory of at least 20 countries, so this is a complex international problem,” Tapilatu said. “It is extremely difficult to comprehensively enforce fishing regulations throughout the Pacific.”

The team, along with paper co-author Peter Dutton, Ph.D., discovered thousands of nests laid during the boreal winter just a few kilometers away from the known nesting sites, but their excitement was short-lived.

“We were optimistic for this population when year round nesting was discovered in Wermon Beach, but we now have found out that nesting on that beach appears to be declining at a similar rate as Jamursba Medi,” said Dutton, head of the NOAA Southwest Fisheries Science Center’s Marine Turtle Genetics Program.

The study has used year-round surveys of leatherback turtle nesting areas since 2005, and it is the most extensive research on the species to date. The team identified four major problems facing leatherback turtles: nesting beach predators, such as pigs and dogs that were introduced to the island and eat the turtle eggs; rising sand temperatures that can kill the eggs or prevent the production of male hatchlings; the danger of being caught by fisheries during migrations; and harvesting of adults and eggs for food by islanders.

Tapilatu, a native of western Papua, Indonesia, has studied leatherback turtles and worked on their conservation since 2004. His efforts have been recognized by NOAA, and he will head the leatherback conservation program in Indonesia once he earns his doctorate from UAB and returns to Papua.

He has worked to educate locals and limit the harvesting of adults and eggs. His primary focus today is protecting the nesting females, eggs and hatchlings. A leatherback lays up to 10 nests each season, more than any other turtle species. Tapilatu is designing ways to optimize egg survival and hatchling production by limiting their exposure to predators and heat through an extensive beach management program.

“If we relocate the nests from the warmest portion of the beach to our egg hatcheries, and build shades for nests in other warm areas, then we will increase hatching success to 80 percent or more,” said Tapilatu.

Wibbels, who is also the Ph.D. advisor for Tapilatu, says that optimizing hatchling production is a key component to leatherback survival, especially considering the limited number of hatchlings who survive to adulthood.

“Only one hatchling out of 1,000 makes it to adulthood, so taking out an adult makes a significant difference on the population,” Wibbels said. “It is essentially the same as killing 1,000 hatchlings.”

The research team believes that beach management will help to decrease the annual decline in the number of leatherback nests, but protection of the leatherbacks in waters throughout the Pacific is a prerequisite for their survival and recovery. Despite their prediction for leatherback extinction, the scientists are hopeful this species could begin rebounding over the next 20 years if effective management strategies are implemented.