UAB researchers partner with the Michael J. Fox Foundation on a new study of Parkinson’s disease risk factors, including a reduced sense of smell.

A reduced sense of smell, or hyposmia, might be a risk factor for developing Parkinson’s disease, and the University of Alabama at Birmingham (UAB) is participating in a study of hyposmia and two other potential risk factors. The study, sponsored by The Michael J. Fox Foundation for Parkinson's Research, is a new arm of the long-running Parkinson’s Progression Markers Initiative (PPMI), which looks to attract as many as 20,000 people worldwide to participate in a brief online survey about the sense of smell. 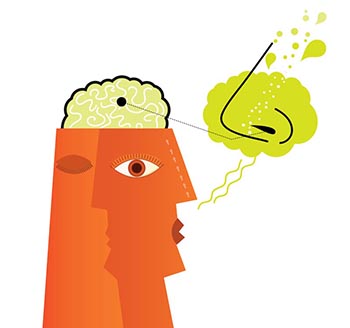 The study is looking for people older than 60 who do not have Parkinson’s disease to take the online survey. Most respondents will then be mailed a scratch and sniff smell test and a brief questionnaire, to be completed at home. Some individuals may also be asked to undergo more extensive testing.

The study will also enroll individuals who have rapid eye movement sleep behavior disorder (RBD) or a mutation in the LRRK2 gene, which is the single greatest known genetic contributor to Parkinson’s disease.

“Understanding risk factors for Parkinson’s disease could help to identify therapies that may prevent the onset of motor symptoms in future generations of PD patients,” said David Standaert, M.D., Ph.D., professor and chair of the Department of Neurology at UAB. “UAB is proud to participate in this innovative research and respectfully ask our local community for volunteers for the study.”

UAB has been part of the PPMI study since it was launched in 2010. The now $55 million landmark observational clinical study was established to look for one biomarker of PD or more, and now it seeks to better understand potential risk factors of the disease. UAB is one of 23 participating sites worldwide and is among the top five sites in numbers of participants.

“In the third year of PPMI, it is evident that a large-scale biomarker study is not only possible in Parkinson’s disease, but is already yielding scientific insights that could help transform the field of Parkinson’s research,” said Todd Sherer, CEO of the Michael J. Fox Foundation. “None of this progress would be possible without the willing volunteers who donate their time and energy to the pursuit of a cure.”

For information about enrolling in PPMI, contact Stephanie Guthrie, CRNP, at slguth@uab.edu.