The foundation was created by Mike Jezdimir, who contracted transverse myelitis (TM) in 1967.

The Mike L. Jezdimir Transverse Myelitis Foundation has given $7,000 to the University of Alabama at Birmingham (UAB) for research on transverse myelitis, a rare inflammatory disease causing injury to the spinal cord with varying degrees of weakness, sensory alterations and disruptions in the nervous system. 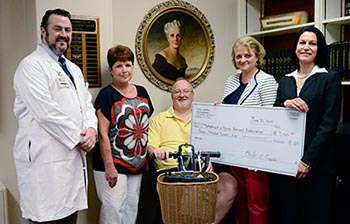 The foundation was created by Mike Jezdimir, who contracted transverse myelitis (TM) in 1967. TM has a conservatively estimated incidence of between one and eight new cases per million per year, or approximately 1,400 new cases annually. Although this disease affects people of all ages, with a range of six months to 88 years, there are bimodal peaks between the ages of 10 to 19 years and 30 to 39 years. Approximately 25 percent of cases are children.

“This foundation was established to raise money for non-traumatic spinal cord injury research at UAB, where the scientists and researchers are doing some great things,” said Jezdimir. “We are dedicated to finding a cure and prevention for this rare spinal cord disease. We feel confident that by working with the scientists and researchers at UAB that, one day, we will be free from a disease that is so traumatic on patients and families.”

The foundation’s gift will be administered by Amie Jackson McLain, M.D., chair of the UAB Department of Physical Medicine and Rehabilitation, and Tara DeSilva, Ph.D., assistant professor in the department.

The foundation has conducted several fundraisers in Alabama, including a 5K run and a fishing tournament. Upcoming events include a glow-in-the-dark 5K night run in November.

For more information on the Transverse Myelitis Foundation, or to donate, go to www.mikestransversemyelitis.com/default.html