Is a common food fungus worsening the AIDS epidemic?

A type of fungus coating much of the stored corn, wheat, rice and nuts in developing countries may be quietly worsening the AIDS epidemic, according to a paper published today in the World Mycotoxin Journal. 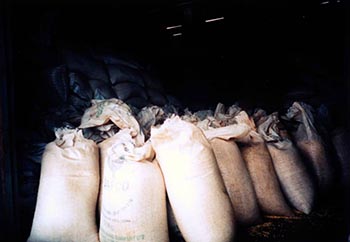 In developing countries, food stored in piles of sacks in warehouses is often contaminated with fungi that give off toxic substancesKept in sacks piled in barns and warehouses, food stores in countries near the equator are contaminated by Aspergillus flavus and A. parasiticus, fungi that produce a toxic substance called aflatoxin. About 4.5 billion people worldwide are exposed to aflatoxin at unsafe levels, and chronic exposure has been linked to liver damage and related cancers; but its role in the spread of infectious disease could make it even more deadly.

“Our work suggests study that aflatoxin exposure may be taking an even greater toll in areas where millions are infected with HIV, including Africa and Asia, the latter with a fast-growing HIV population and rice storage areas contaminated by fungi,” said Pauline, Jolly, Ph.D., professor in the Department of Epidemiology within the School of Public Health at the University of Alabama at Birmingham (UAB). Strict regulation and monitoring minimize exposure in the United States.

Jolly and her colleagues recruited 314 HIV-positive people who were not yet on antiretroviral therapy for the study in Kumasi, Ghana. They divided patients into four groups based on their level of aflatoxin exposure and found that those in the highest exposure group were 2.6 times more likely to have a high HIV viral load than those in the lowest exposure group. Higher viral load translates into higher rates of HIV transmission and the potential for earlier progression to the opportunistic infections of AIDS.

“Previous studies by our team had looked at the possible interaction of aflatoxin and HIV on immune suppression, and this study examined twice as many patients as previous studies,” said Jolly, the study’s corresponding author. “It also was structured to eliminate factors such as opportunistic infections and antiviral combination therapy in clarifying the relationship between aflatoxin exposure and HIV for the first time.”

Leading theories suggest that the fungal toxin may suppress the immune system by reducing the production of certain immune cells or the proteins that activate them. The toxin also may increase the expression of genes that result in more copies of the virus, but more study is needed to confirm the mechanisms.

This research was supported by a grant by the U.S. Agency for International Development (LAG-G-00-96-90013-00) plus support from the Centers for Disease Control and Prevention and National Institute on Minority Health and Health Disparities.

“We have done a series of studies now confirming a link between HIV viral load and aflatoxin exposure, but the problem has not yet been recognized or addressed,” said Jolly, an HIV immunologist who does most of her work in Ghana. “While this study was larger than our previous study, a fungal contribution to HIV transmission will only be proved once and for all by larger randomized studies for which there now is no funding. The scientific and world-health communities need to decide soon whether or not this question is worth answering.”