by Jim Bakken
Mitochondrial DNA determines oxidant levels and may further explain why some people get sick and others don’t.

Genes in mitochondria, the “powerhouses” that turn sugar into energy in human cells, shape each person’s risk for heart disease and diabetes, according to a study published recently by researchers at the University of Alabama at Birmingham in the Biochemical Journal. The findings may further explain why some people get sick and others do not despite their having the same traditional risk factors like aging, obesity and smoking. 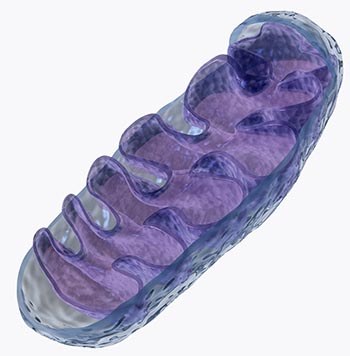 A mitochondrion, or cell powerhouseResearchers have long sought to determine disease risk by looking at diet and variations in nuclear genes, leaving out differences in mitochondrial genes, the second kind of DNA in every cell.

Research in recent years revealed that miscues in mitochondrial energy production create too many particles called oxidants and free radicals that cause cells to self-destruct as part of heart disease, diabetes and cancer.

“Having been in this field for decades, I remember when mitochondrial DNA variations were thought to play a role only in the rarest of genetic syndromes,” said Scott Ballinger, Ph.D., professor in the Division of Molecular and Cellular Pathology within the UAB School of Medicine, and corresponding study author. “Today, there is a growing consensus that variations in mitochondrial DNA alone make a substantial contribution to each person’s risk for heart disease, and ours is the first study to directly confirm it in a living mammal.”

Ballinger’s study results reflect the theory that our ancient, one-celled ancestors “swallowed” the bacterial forbears of what are now mitochondria. The newcomers gave their hosts the ability to convert sugar from food into about 15 times as much cellular energy as they could before by using oxygen. Evolution favored the match, and mitochondria became permanent sub-compartments of human cells.

For that reason, each human cell now has two genomes, the long stretches of DNA that encode the blueprint for the human body: one set inherited from both parents in a centrally located nucleus, and a separate, smaller set in each mitochondrion passed down from mom thanks to details of cell division.

The theory that maternally inherited, mitochondrial DNA shape disease risk has been hard to prove. The field has struggled to genetically engineer mice that would enable researchers to separate the impact of one gene set from the other. Additionally, the human nuclear genome contains more than 30,000 genes compared to a mere 13 energy-related genes in mitochondria, so few researchers paid them much attention.

To determine if mitochondrial DNA variations drive disease risk independent of an individual’s nuclear DNA, the research team started with two varieties of mice; the C57 mouse known to be vulnerable to diseases associated with diet, and the C3H mouse, which is resistant. The study authors then used a technique called nuclear transfer to remove the nucleus from an embryo in each mouse line and switch them.

Because mitochondria reside in the cytoplasm (not in the switched nuclei), the new embryos grew into mice whose cells had their own mitochondrial DNA and the nuclear DNA from the other line. That enabled researchers to compare mice with the same nuclear DNA, but different mitochondrial DNA, isolating the latter’s distinct contribution to risk.

In general, the data showed that replacing mitochondrial DNA alone could increase or decrease a given mouse’s susceptibility to a model of heart failure.

In addition, putting disease-vulnerable C57 mitochondria in a cell with a C3H nucleus made that cell take on the energy characteristics of the original, more energy efficient C57 strain. This came with a 15 percent decrease in the amount of oxygen needed to make the same amount of cellular energy in the form of adenosine triphosphate. In a mixed bag, mice with efficient C57 mitochondrial DNA also generated 200 percent more oxidants than their disease-resistant counterparts with C3H mtDNA.

Another study underway in Ballinger’s lab is comparing mitochondrial DNA variations in people of African versus northern European ancestry. Evidence suggests that mitochondria carrying African mitochondrial DNA get more energy from the same amount of oxygen and sugar, perhaps reflecting an evolutionary history of food scarcity. Early migrating humans may have found more food in Europe, but would also have had to brave the cold. Thus, Euro mitochondria appear to be less efficient, perhaps because a byproduct of such inefficiency is the increased generation of body heat. More efficient mitochondria, with their greater oxidant production, may explain, in part, higher incidences of heart disease and diabetes among those of African ancestry in the face of modern, high-calorie diets.

Along with Ballinger in the Division of Molecular and Cellular Pathology, authors of the study were Jessica Fetterman, Blake Zelickson, David Westbrook,  Melissa Pompilius, Melissa Sammy, Michelle Johnson, Kimberly Dunham-Snary, Balu Chacko and Victor Darley-Usmar, many of whom are also members of the UAB Center for Free Radical Biology and Medicine. Also making important contributions were Larry Johnson, Jinju Zhang and Robert Kesterson in the UAB Department of Genetics, Douglas Moellering in the UAB Department of Nutrition Sciences, Wayne E. Bradley, Chih-Chang Wei and Louis Dell’Italia in the UAB Division of Cardiology. Theodore Schurr from the University of Pennsylvania Department of Anthropology and Xuemei Cao and Danny Welch from the Department of Cancer Biology at the University of Kansas Cancer Center also led the effort.

Support for the work was provided by the National Institutes of Health (RO1 94518 and RO1 103859), the National Foundation for Cancer Research, the Susan G. Komen Foundation (SAC111370), U.S. Army Medical Research & Material Command (W81XWH-07-1-0540d), and a pilot grant from the UAB Comprehensive Cancer Center (CA013148). Additional support was receive the American Heart Association and the NIH-funded Diabetes Research Center’s Bioanalytical Redox Biology Core (P60 DK079626) located at the University of Alabama at Birmingham. The technology is the subject of a pending patent application filed on the intellectual property rights owned by The UAB Research Foundation.