Newly identified immune receptor may activate B cells in autoimmunity

by Jim Bakken
A genetic variant that shapes each person’s immune response contributes to the chances of developing autoimmune disease.

A newly identified immune protein influences each person’s response to vaccines and risk for autoimmune diseases like lupus and multiple sclerosis, according to a study published today by researchers from the School of Medicine at the University of Alabama at Birmingham in the journal Science Translational Medicine. The protein, called a receptor and part of signaling pathways, also provides a new target for personalized therapies for patients with autoimmune diseases. 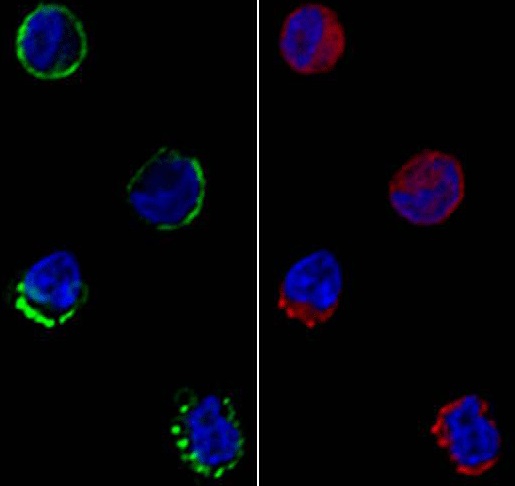 The research team found that people with a genetic variant present in approximately 15 percent of the world population can express an additional immune system receptor on their B cells, the cells that make antibodies. This additional receptor, called an Fc receptor, binds the antibodies made by B cells and plays a key role in regulating their production. Part of the immune system, antibodies can recognize invaders like bacteria and remove them from the body. In individuals with autoimmune diseases, however, they can also attack the body’s own cells, causing disease.

To maintain stable numbers in the body, B cells have evolved to include Fc receptors that “sense” when antibody production has gone far enough. For more than 20 years, researchers believed that B cells expressed only a form of Fc receptor that can shut down antibody production when triggered. This new work shows that individuals with the genetic variant can also express an activating Fc receptor.

“This new finding could play a significant role in the way companies design treatments for autoimmune diseases, in a more targeted approach,” said Robert Kimberly, M.D., director of the UAB Center for Clinical and Translational Science and corresponding author on the paper. “Now efforts can be made to target the individuals who will benefit from the treatments, based on the gene mutation.”

The authors found that this variant turns a gene that is normally silent into one that is expressed on B cells. This variant is shown to be a risk factor for the development of the autoimmune disease systemic lupus erythematosus or SLE. Patients with SLE have B cells that make antibodies that fight the body’s own cells and tissues. Expression of this receptor likely contributes to this inappropriate antibody production by altering the balance of B cell activity.

These findings have important implications for newer therapies under development to treat autoimmune diseases by targeting the B cells that make autoantibodies (antibodies that target healthy tissues). These therapies work by using specific antibodies to target B cells and the commonly occurring inhibitory Fc receptor. Thus, in patients receiving these therapeutic antibodies, B cell activity would be decreased. However, in a significant number of patients having the variant described in the current study, the inhibitory receptor, and thus the action of the treatment, could be countered by the presence of the activating receptor.

Therapeutic antibodies, including those targeting B cells, are widely used to treat autoimmunity and cancer. Their specificity for disease-related targets can avoid side effects seen in broader-acting drugs. But these therapies are subject to influence by the genes that fine-tune each person’s immune system, including Fc receptors.

“Our findings provide pharmaceutical companies with a new screening tool to identify not only those patients most likely to respond to these antibody-based therapies but, more importantly, individuals in which these therapies might actually be harmful,” said Jeffrey Edberg, Ph.D., professor of Medicine at UAB, senior and corresponding author.

“With advances in genetics, the pharmaceutical industry now has knowledge available to identify the patients most likely to respond to these therapies, and become a leader in the developing field of personalized medicine,” Edberg said. “Such an approach may save not only time but also costs associated with clinical trials by identifying patients with this mutation.”

Kimberly agrees. “The problem for drug designers is that they have been designing antibody-based drugs with an understanding of B cell biology made out of date by our study — a world where only inhibitory feedback Fc receptors are signaling,” Kimberly said.

Now the field has an opportunity to improve on efforts begun 16 years ago, Kimberly says, when the first round of antibody-based treatments, like Remicade, received FDA approval for the treatment of autoimmune diseases. Such drugs targeted tumor necrosis factor alpha, a signaling protein known to drive inflammation. Since then, researchers found that a third of patients do not respond to this class of treatment and years later are still searching for the genetic differences that explain why.

In the current study, the research team conducted a series of elegant experiments with genetically engineered B cells, antibodies and mice that confirmed the link between the variant, changes in B cell Fc receptors and immunity. They also confirmed the ability of those receptors to shift the antibody threshold upward and the mechanism by which activating Fc receptors signal.

The study results raise interesting questions about how this variant arose in the human population. Human genes randomly change all the time. Some changes make no difference, some confer advantages, and others cause disease. The same hyperactive immune system that is making the group with the variant more likely to develop lupus may also help protect these individuals by responding to infection more effectively.

“Future research into the impact of expression of this Fc receptor in B cells on antibody production in both health and disease will likely lead to advances in our understanding of both autoimmunity and natural responses to infectious disease challenges,” said Kimberly.