by Bob Shepard
New understanding of roundworm reproduction could have impact on human and animal infertility issues, say UAB scientists.

A paper in the journal Science about the fertility of roundworms may have implications for everything from captive pandas to infertile couples struggling to conceive.

Control of sperm motility by pheromones. Ciliated sensory neurons (red) in the nose detect a balance between pheromones andfood-derived cues. Sensory neurons send hormones to the female reproductive tract that convert fat precursors (green) into prostaglandins, which guide motile sperm (magenta) to the fertilization site (yellow). This mechanism enables C. elegans to modulate reproductive capacity in response to dynamic environments.The sexual behavior of the roundworm C. elegans is unusual, to say the least. This is an animal that can carry around its own sperm and eggs, producing offspring by itself early in its three-week lifespan. The worm’s fertility is finely tuned to its environment. When times are good — that is, the bacteria it eats are plentiful and there aren’t too many other worms around — each worm produces some 300 progeny before shuffling off this mortal coil. If food is running low and there’s a crowd growing, the worm’s reproductive system shuts down.

The Science paper, from a group of University of Alabama at Birmingham researchers and colleagues at Vanderbilt University and Louisiana State University, reveals for the first time the details of how this fertility sensing system works. The scientists have diagrammed a chemical trail directly from sensors in the worm’s nose to conditions in its ovary. When the environment is favorable, neurons alert egg cells to ramp up production of signaling molecules called prostaglandins. The prostaglandins head directly to the worm’s sperm, guiding them back to the waiting eggs.

Previous studies from the UAB group first reported finding prostaglandins in worms. This was unexpected, because C. elegans doesn’t have cyclooxygenase (COX) enzymes. 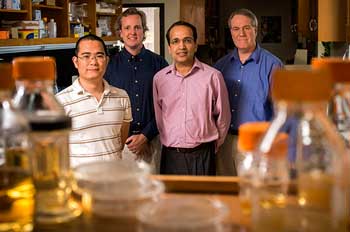 From left: Hieu Hoang, graduate student in the Miller lab; Michael Miller; Jeevan Prasain, assistant professor in the Department of Pharmacology and Toxicology; and Ray Moore, research assistant in the Targeted Metabolomics & Proteomics Laboratory.“The dogma had been that COX was the only enzymatic initiator of prostaglandin synthesis,” said Michael A. Miller, Ph.D., professor in the Department of Cell, Developmental and Integrative Biology at the UAB School of Medicine and an author of the Science paper. “Although worms don’t have COX enzymes, we found prostaglandins using sophisticated mass spectrometry techniques. “That in itself was a surprising finding, that there is an alternative pathway to make these signaling molecules.”

“Prostaglandins are giving the sperm positional information,” Miller said. “They are showing sperm where the eggs are in the female reproductive tract.”

The new study found that the worm’s olfactory system in the nose was able to control prostaglandin production in the ovary. When the worms smelled a bad environment, the sperm became confused, the sperm moved slower and in a less direct mode to the eggs, which reduced fertility. The study provides a roadmap for how pheromones and other chemical cues might affect fertility in a wide array of animals.

“While it has been established that prostaglandins play a key role in the way many species reproduce, Dr. Miller’s research has uncovered a novel effect that prostaglandins may have on sperm function,” said Richard Okita, Ph.D., of the National Institute of Health’s National Institute of General Medical Sciences, which partially funded the research. “These results also confirm that, because C. elegans uses the prostaglandin system to regulate reproductive events, the tiny worm is a suitable model system for identifying related biological processes that may control fertility and reproduction in higher organisms.”

The overarching concept of the study is that perception of the environment by females directly affects fertility, according to Miller. That leads to the natural question: Does this apply to anything beyond roundworms? The researchers’ initial strategy was to test whether the sperm-affecting molecules are present in mammals.

When the researchers looked for prostaglandins in COX-deficient mice models from Vanderbilt using mass spectroscopy tests, the signaling molecules were there — and not just in the ovaries.

“If mice have these prostaglandins, it’s easy to envision that they exist in humans too,” Miller said.

So what if humans have an alternative route for making prostaglandins without COX? That means that therapies aiming to shut down COX enzymes — a current hot topic in the cancer arena, along with other disease research — might not work as well as intended, Miller notes.

Prostaglandins are best known for their role in pain signaling. Aspirin, ibuprofen and the rest of the nonsteroidal anti-inflammatory drugs (NSAIDs) target COX enzymes to muffle prostaglandin production.

“Lots of ideas and efforts have been made to use NSAIDs to treat human pathologies, including colorectal cancer and other diseases,” Miller said. “One possibility that our research brings up is that if you aren’t totally blocking prostaglandin production with NSAIDs, you could develop other drugs to work on this alternative pathway.”

Miller said the pathway could have its own biological roles separate from these COX-dependent prostaglandins.

“If we could identify the enzymes and then target drugs to them, that could be more beneficial than NSAIDs alone,” he said. “These are some of the questions we are pursuing.”

But just as intriguing is the current study’s possible insight into fertility questions in a wide range of animals, including humans.

“Lots of animals suffer fertility problems,” Miller said. “Zoos in particular have difficulty getting many species to reproduce in captivity. One of the big problems in fertility research is that what happens once sperm are inseminated is a black box. That is why the worm model is so interesting. We can look at sperm motility directly because the worm’s skin is transparent.”

The study’s first author is Katherine McKnight, M.D., who worked in Miller’s lab while she was completing her fellowship training in UAB’s Division of Reproductive Endocrinology and Infertility. A new fellow working on the project is Bruce Pier, M.D.

“We now want to know whether COX-independent prostaglandins are in the follicular fluid of human ovaries,” Miller said. “Prostaglandins have been shown to bind to a calcium channel in human sperm. In the worms we can tell that they are providing positional information and enhancing sperm motility. It’s provocative. Now we are working with Dr. Pier to measure prostaglandin levels in patients and see if they correlate with fertility.”

Could that mean that the entire nose-to-ovary fertility system operates in humans as well? Could smells and other environmental cues affect our reproductive success? It’s far too early to say, Miller cautions.

“There’s a lot of controversy over whether humans even perceive pheromones. For a long time it has been thought that your environment impacts fertility, but it’s much less clear how,” he said.

These are heady questions for a lab that is focused on cell communication.

“We start with basic science research,” Miller said. “When you look at these worms, you might think that they have nothing in common with us. But at the molecular level they are using the same machinery. With this work, we’re starting to take what we’ve learned in worms and translate that to mice and humans. It’s very exciting.”

This research was supported by the UAB bridge funding mechanism, the UAB Reproductive Endocrinology and Infertility Fellowship Program, and the NIH, including bridge funding from the National Institute of General Medical Sciences.