by Jim Bakken
Boni Elewski, M.D., led one of two trials featured in the New England Journal of Medicine that show secukinumab is a safe and effective psoriasis treatment. 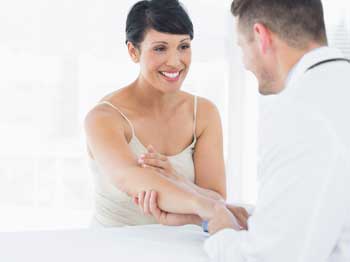 Randomized, phase III research from the University of Alabama at Birmingham shows that a new drug improves symptoms related to moderate to severe plaque psoriasis, a chronic skin disease of scaling and inflammation.

Affecting more than 3 percent of people in the United States, psoriasis can go beyond the physical and also affect mental health, according to the National Institute of Arthritis and Musculoskeletal and Skin Diseases.

Boni E. Elewski, M.D., professor of dermatology, is the principal investigator of the Efficacy of Response And Safety of two fixed secUkinumab REgimens in psoriasis (ERASURE) trial, one of two studies in the recent New England Journal of Medicine article “Secukinumab in Plaque Psoriasis — Results of Two Phase 3 Trials.”

“The combined results of ERASURE, along with the FIXTURE trial, are very exciting in terms of the efficacy and safety of secukinumab,” Elewski, co-lead author, said.

ERASURE compared the drug to placebo, while FIXTURE compared it to placebo and another psoriasis treatment — etanercept. Both trials assessed the efficacy, safety and tolerability of secukinumab. Together, the trials are part of the largest phase III program in moderate to severe plaque psoriasis completed to date, which involved more than 3,300 patients in more than 35 countries.

“We found that a statistically significant percentage of secukinumab-treated moderate to severe psoriasis patients achieved an up to 90 percent skin clearance after 12 weeks, and with continued treatment, a majority of these patients had maintained those results at 52 weeks,” Elewski said.

“These results’ being published in NEJM validates the significance of the studies and will hopefully draw attention to the major unmet need of this disease,” Elewski said. “If approved, having a safe and effective drug like secukinumab would be amazing, and it will greatly improve the quality of life for psoriasis patients, many of whom are dissatisfied with existing therapies.”

Both studies were funded by Novartis.