by Jim Bakken
Consuming fried foods and sugar-sweetened beverages is linked to a 50 percent increase in risk of death, according to a new study in the American Journal of Kidney Diseases. 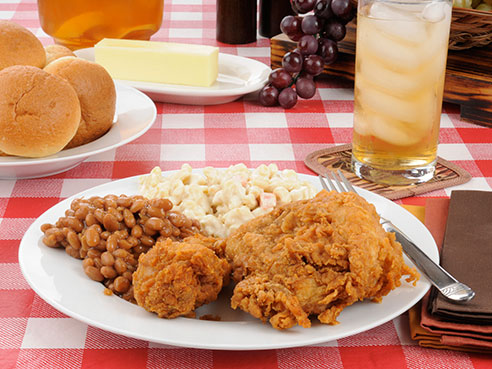 New research from the University of Alabama at Birmingham published in the American Journal of Kidney Diseases shows consuming a “Southern-style” diet — consisting of processed meats, fried foods and sugar-sweetened beverages — results in higher risk of death in those with chronic kidney disease.

Choosing the right foods can control the buildup of waste products and fluid in the blood of those with kidney disease, which can help decrease the workload of the kidneys, according to the National Kidney Foundation. It may also help to slow down the loss of kidney function.

Using data from the Reasons for Geographic And Racial Differences in Stroke, or REGARDS, study, the research team identified 3,972 participants who had stage 3-5 chronic kidney disease, but had not started dialysis. They then analyzed dietary patterns in those individuals. Those who ate primarily Southern-style cuisine had a 50 percent increase in risk of death over a 6.5-year follow-up period.

“This adds to the evidence that suggests that the foods that they eat can meaningfully impact long-term survival in individuals with kidney disease,” said lead author Orlando Gutiérrez, M.D., associate professor of medicine in the UAB Division of Nephrology.

The study also found that higher intake of a healthy diet of fruits and vegetables was associated with improved survival.

“For clinicians, this suggests that focusing on modifying general patterns of foods that people eat, instead of individual components of the foods like salt intake or fat intake, may be more helpful in counseling patients,” Gutiérrez said. “It may be more helpful to focus on general patterns of eating instead of individual nutrients since this may be easier for patients to conceptualize and therefore actualize.”

While a healthy diet was associated with improved survival, it had no protective benefit when it came to progression to kidney failure, Gutiérrez says.

“We did not find an association of either a Southern-style diet or a fruits and vegetable diet with risk of developing end-stage renal disease, though this may have been because we were underpowered to detect any relatively modest effect,” Gutiérrez said.

Gutiérrez says there was limited ability to determine whether the dietary patterns examined actually reflected foods people consumed or were just a good marker of overall lifestyle habits.

“It is possible that the Southern pattern of eating is a just a good marker of an unhealthy lifestyle, and not so much unhealthy eating,” Gutiérrez said. “Even if the latter is the case, it certainly suggests that adopting healthy habits such as engaging in physical activity and eating a healthy diet are important for long-term outcomes.”

A previous study at UAB showed that a Southern-style diet could also possibly increase stroke risk.