Changes in the eye might predict onset of frontotemporal dementia

The eye is a window to the brain; scientists discover early signs of dementia in changes to neurons in the eye’s retina. 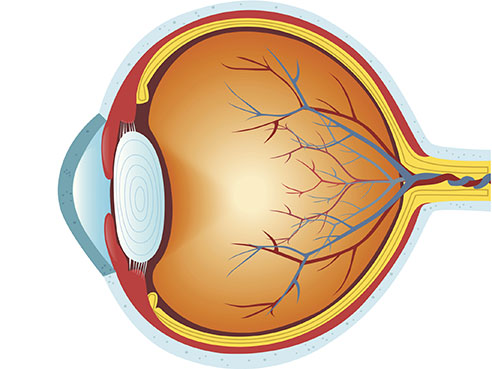 Changes to the eyes might help diagnose the onset of frontotemporal dementia, the second most common form of dementia, according to new research from scientists at the University of Alabama at Birmingham, Gladstone Institutes and the University of California, San Francisco.

Findings published today in the Journal of Experimental Medicine show that a loss of cells in the retina is one of the earliest signs of frontotemporal dementia in people with a genetic risk for the disorder — even before any changes appear in their behavior.

The researchers studied a group of individuals who had a certain genetic mutation that is known to result in FTD. They discovered that, before any cognitive signs of dementia were present, these individuals showed a significant thinning of the retina compared with people who did not have the gene mutation.

“This finding suggests that the retina acts as a type of window to the brain,” said Erik Roberson, M.D., Ph.D., associate professor in the Department of Neurology at UAB and a study co-author.

“Retinal degeneration was detectable in mutation carriers prior to the onset of cognitive symptoms, establishing retinal thinning as one of the earliest observable signs of familial FTD,” Gan said. “This means that retinal thinning could be an easily measured outcome for clinical trials.”

Although it is located in the eye, the retina is made up of neurons with direct connections to the brain. This means that studying the retina is one of the easiest and most accessible ways to examine and track changes in neurons. 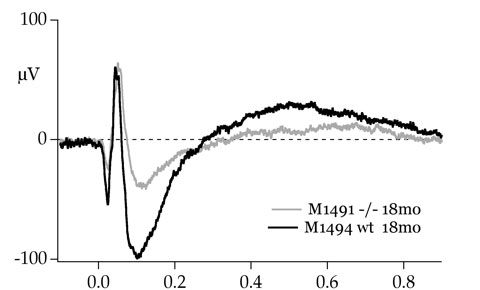 This electroretinogram image shows photoreceptor activity from two mice. The gray line represents the animal model that has frontotemporal dementia, the black line is the control or healthy mouse. The large negative spike in the diagram indicates a reduction of ganglion cells in the retina of the mouse model that mirrors human dementia.Roberson’s laboratory has been studying an animal model for FTD. Using a process called ERG, or electroretinogram — similar to an EKG — Roberson and Kraft showed that the retinas in mice with FTD had a loss of ganglion cell function; these cells are responsible for transmitting signals from eye to brain. That data, along with additional ERG studies that Kraft performed in California, aligned well with comparable human studies conducted by Gladstone and UCSF.

“We have a more complete understanding about how the retina functions as opposed to the operations of the complex brain,” said Kraft. “That makes it much easier to use the retina as a tool for better understanding FTD.”

The researchers also discovered new mechanisms by which cell death occurs in FTD. As with most complex neurological disorders, there are several changes in the brain that contribute to the development of FTD. In the inherited form researched in the current study, this includes a deficiency of the protein progranulin, which is tied to the mislocalization of another crucial protein, TDP-43, from the nucleus of the cell out to the cytoplasm.

However, the relationship between neurodegeneration, progranulin and TDP-43 was previously unclear. Using the UAB mouse model of FTD, the scientists were able to investigate this connection for the first time in neurons from the retina. They identified a depletion of TDP-43 from the cell nuclei before any signs of neurodegeneration occurred, signifying that this loss may be a direct cause of the cell death associated with FTD.

TDP-43 levels were shown to be regulated by a third cellular protein called Ran. By increasing expression of Ran, the researchers were able to elevate TDP-43 levels in the nucleus of progranulin-deficient neurons and prevent their death.

“The results of this study have shown that we can use the thinning of retinal cells as a marker for this type of dementia,” said Roberson. “Further studies may also help determine whether the changes in the retina can be utilized as a marker of disease progression. We may also be able to use the retina as a means of gauging the effectiveness of new therapies.”