by Bob Shepard
Philanthropic support has enabled the UAB Department of Neurology to make huge strides in knowledge of diseases such as Parkinson’s. 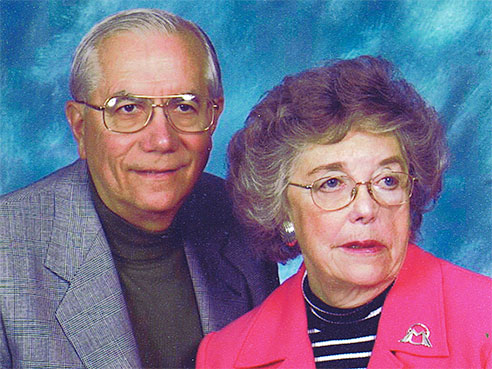 John and Ruth Jurenko John Jurenko, retired vice president of sales and marketing at ADTRAN, first encountered the Department of Neurology at the University of Alabama at Birmingham as a Parkinson’s disease patient, and he was quickly impressed by the innovative research taking place.

“My original contact with the department was because of the disease, but then I got to know the people there,” Jurenko recalled. “They are exceptional people, both professionally and personally. I learned that they wanted to grow the department, and I thought I could help.”

Department chair David Standaert, M.D., Ph.D., told Jurenko he had his eye on a top Parkinson’s researcher at Johns Hopkins University, Andrew West, Ph.D. West, said Standaert, was a guy he would like to have.

John and Ruth Jurenko have also funded the John A. and Ruth R. Jurenko Research Scholar Fund, and the UAB-HudsonAlpha Collaborative Project in the Genetics and Genomics of Parkinson’s Disease. Philanthropic support like the Jurenkos’ has been key to making the UAB Department of Neurology and its associated divisions and centers the hives of innovation they are today, says Standaert.

“Almost all of the major faculty recruitments we have done have been based on philanthropic gifts,” he said. “Their willingness to support our vision has enabled the tremendous growth we have experienced in less than a decade. When I first came to UAB in 2006 to lead CNET, it was just me. Now the center comprises more than 50 scientists, students, postdoctoral trainees and staff.”

This philanthropic investment in research has contributed to what Standaert describes as an explosion in Parkinson’s discoveries.

“The amount of new knowledge in the field of Parkinson’s disease gained in the past five years exceeds everything we knew from the previous 200 years,” Standaert said. “We are deeply grateful to John and Ruth Jurenko for helping us achieve so much in such a relatively short period of time.”

“Meaningful advances in neurodegeneration research are very hard-won,” West said. “The John A. and Ruth R. Jurenko Professorship in Neurology allows us to accelerate the process and provides key resources to address critical questions that can’t wait for traditional funding mechanisms. With the support of the Jurenkos, we can focus on addressing critical bottlenecks and hasten the identification of novel neuroprotective therapeutics.”