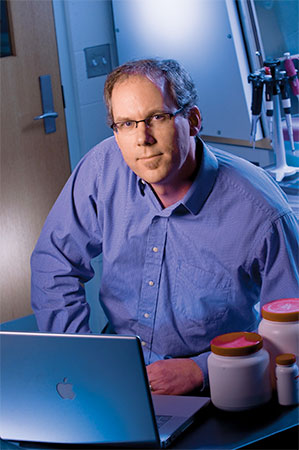 Troy RandallTo better understand the key molecular and cellular steps in the natural control of viral infections, the National Institute of Allergy and Infectious Diseases in late 2012 invited multi-project applications for U19 grants. The target theme was “Immune Mechanisms of Virus Control.” That has now led to a $10 million, five-year grant at the University of Alabama at Birmingham, awarded in late summer.

The grant includes three UAB labs working with mouse models and one lab at the University of California-Davis. It also includes a series of human experiments run at Emory University. The UAB grant focus — one of eight U19 grants funded — is viral-induced cell-fate decisions in anti-viral immunity.

The NIH grants are meant to help improve protective immunity after vaccination, or help tamp down the destructive, out-of-control immune response that sometimes follows a viral infection.

Researchers from UAB and the seven other U19 grants will hold their first yearly meeting in Washington next month, the start of what the NIH calls “a network of synergistic research teams.”

“The U19’s are a little different from a lot of grants,” said Troy Randall, Ph.D., principal investigator and a professor in the Department of Medicine’s Division of Clinical Immunology and Rheumatology. “The NIH decides ‘this is an underdeveloped area of science,’ and it calls for proposals. Given the expertise that we have, we put together a grant on adaptive immunity.”

Simply put, adaptive immunity is the response that follows a vaccination, where the body produces, not only antibodies that can recognize and neutralize a viral infection, but also “memory cells” that maintain watch against future infections by the same virus.

The response has many complex steps. Certain immune cells have to physically contact each other and also respond to specific cytokine signals in order to become activated. Activation provokes differentiation of the immune cells into new types of T and B cells that have complementary roles.

Unraveling details of those cell-fate decisions could help a clinician alter a patient’s immune response for the better — such as improving the response to vaccination, stimulating an “exhausted” immune system to resume the fight against cancer or HIV, or ratcheting down an auto-immune disease.

In the UAB grant, Randall’s lab is looking at CD4 T cells that develop into “T follicular helper cells” (Tfh). After they develop, the Tfh cells migrate into a lymph node follicle and stimulate rapid growth of the resident B cells (which creates those swollen lymph glands underneath the jaw). Based on a previous discovery that cytokine IL-2 prevents CD4 T cells from becoming Tfh cells, Randall will study how the IL-2 level is controlled during influenza infection in mice, and whether changes in that level will give better vaccination results.

The lab of Frances Lund, Ph.D., chair of the UAB Department of Microbiology, is looking at a cell-fate step in B cells after they have proliferated. She wants to understand the switch from rapid cell division to a cell that starts to manufacture antibody molecules. The cytokine interferon-gamma (IFN-gamma) has been implicated in that cell-fate decision, which leads to a fork in the road — most of the B cells make a lot of antibody and then die, but others become long-lived antibody-secreting cells that can produce protective antibodies for decades.

The lab of Allan Zajac, Ph.D., associate professor of microbiology at UAB, is looking at CD8 T cells, which can develop into the classic “killer” T cells that can destroy virus-infected cells. A cell-surface adhesion molecule called ICAM seems to direct the type of T cell produced after cell-to-cell interactions — some of the CD8 T cells become killer T cells, and others become long-lived memory T cells. Zajac believes that ICAM limits the amount of IL-2 experienced by some clustered T cells, and this helps produce memory cells rather than killer cells. Zajac has two versions of lymphocytic choriomeningitis virus that differ by only two nucleotides — one causes an acute infection in mice that is quelled in 10 days, while the other, faster-replicating virus gets out of control and exhausts the immune system, and the mice take months to recover.

Comparing those two infections may show how to control T cell differentiation to prevent immune response exhaustion or, conversely, how to “wake up” an exhausted immune response.

Nicole Baumgarth, DVM, Ph.D., University of California–Davis, studies early B cells that make IgM antibody right after influenza infection. This first-line defense is active during the week that it takes for the body to select, activate and proliferate B cells of the adaptive immune response that make the more potent IgG antibody. Though IgM binding to a virus is weaker, it activates the complement pathway that amplifies the immune response. Baumgarth wants to understand how those early B cells are controlled.

It is important to learn whether these human immune-response mechanisms mirror those of mice. So the UAB U19 grant includes several human experiments run by Frances Eun-Hyung Lee, M.D., assistant professor of pulmonary, allergy and critical care medicine, Emory University. She uses blood samples from volunteer patients or subjects for that work.

For the role of IL-2 in preventing Tfh cell differentiation, Lee will look at cancer patients who receive IL-2 as part of their treatment for multiple myeloma. She will test whether the IL-2 dampens their immune response to normal gut microflora.

For the role of IFN-gamma in creating long-lived B memory cells, Lee will compare two groups of people — veterinary school students at the University of Georgia who all get a rabies inoculation at the start of school and about 58 people of Thai descent, seen as patients at the NIH, who have an autoimmune disease that makes them deficient in IFN-gamma. The Thai patients also get a rabies inoculation as the normal standard of medical care before traveling to Thailand, where rabies-infected bats are common. Lee will look for differences in long-lived B cells between the two groups.

For the human correlate to the early B cells, Lee will look at people given measles vaccine, to see if such B cells appear in the early response and remain later.

About three-fourths of the UAB U19 grant money — more than $7 million — will be spent at UAB.

The U19 grants have one other intriguing feature — the chance to get additional funds for one-year pilot studies. “NIH set aside a pot of money that they call the Infrastructure and Opportunities Fund,” Randall said. “They want people to interact and cooperate. Hopefully, we will see, ‘Oh, they’re doing this neat thing. Let’s work with them to do something we can’t do alone.’ ”